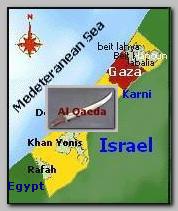 In the begining of 08/2007 a videotape, posted in one of the web sites related to Al Qaeda, is showing a group of masked men, wearing black, practicing basic military drill in sand dunes. The videotape is claimed to be taken in Gaza Strip recently showing Mujahidin from a new organization – “Jaish al-Umah” – Army of the Nation (Umah in Arabic refers generally to the nation of Islam), affiliated to Al Qaeda in its first appearance in Gaza. This videotape raises the question if Al Qaeda is really basing itself in Gaza.

* This videotape could be taken anywhere in the sandy dunes of the Middle East. It was carefully edited so no reference point can be seen in the background of the movie.  It could be very reliable to show in the background something to prove that the movie was really taken in Gaza Strip.

* Since the suicide attacks in Sinai Peninsula in Taba resort on 10/07/2004, and in Sharm El-Sheikh resort on 07/23/2005, it is obvious that groups affiliated to Al Qaeda are operating among the Bedouins of Sinai.

* The tunnels between Gaza Strip and EGYPTIAN Rafah in North West Sinai are used not only to smuggle weapons, but al kinds of merchandise and it is known for years that Palestinian fugitives or terrorists moved from Gaza to Sinai through these tunnels and vice versa, fugitives from Sinai fled the EGYPTIAN authority to Gaza Strip.

* From late 2005 Militant groups in Gaza claimed to operate on behalf of Al Qaeda. The notorious Army of Islam (Jaish al-Islam) led by the Durmush clan in Gaza, pledged on the web loyalty to Al Qaeda just few weeks ago, on 07/19/2007.

* Hamas does not hesitate to use power in order to fully implement its sovereignty on Gaza strip against the Fatah, against the Army of Islam ( see – Alan Johnston ) and these days against the PALESTINIAN Islamic Jihad that challenges Hamas authority by shooting Kassam rockets toward Israel. The public affiliation of the Army of Islam to Al Qaeda turned out to be a mistake because it toughen the attitude of Hamas toward Durmush clan.

* There are many political interests to undermine Hamas legitimacy in Gaza. It can be the Fatah supporters in the West Bank, the EGYPTIAN regime that is negotiating with Israel a new military protocol to increase the number of EGYPTIAN troops in Sinai Peninsula, under the official excuse that they are needed to fight Al Qaeda in Sinai. Also Israel has a deep interest to legitimize a possible future military operation in Gaza.

The last videotape showing Al Qaeda affiliated “Jaish al-Umah” training in Gaza is, basically, recycling of the same allegations since 2005.

There is nothing to prove when and where this videotape was really filmed.

It can be, just the same, a cynical provocation, to undermine Hamas and to serve its opponents’ political interests.
* Related topics –