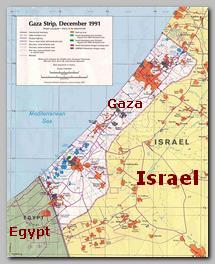 On 08/08/2007 doctors and personnel from the main hospital in Gaza, Shifa Hospital, protested the arrest of a senior doctor in the hospital and his son, by the ’special operational force of Hamas – called by the local people “Tanphizya”. The doctor is known as a Fatah supporter.

A day later, on 08/09/2007, the “Tanphizya” arrested few more Fatah supporters in Khan Yunis, in the South of Gaza Strip, after the local office of a group of former Fatah activists, who joined the Hamas, was attacked by gun shots and a small explosive device.  Khan Yunis is the home town of Mohammed Dahlan, once the strong man of Gaza, the head of the local Preventive Security in the days of the former President Yassar Arafat, a firm opponent to Hamas and has a very large support in Khan Yunis. In order to carry out the arrests the “Tanphizya” confronted the local residents and was forced to shoot in the air.

On 08/10/2007, once again, the “Tanphizya” confronted dozens of demonstrators when they came to arrest six more Fatah loyalist in Beit Hanun, in the North of Gaza Strip.

Late at night unknown masked men critically wounded Idriss el-Jaabri (42), the commander of Halhul police station and a Fatah senior member, in Hebron district, 30 km South of Jerusalem in  West Bank. This occurred after the Fatah arrested local Hamas supporters, probably in retaliation to earlier Hamas arrests in Gaza. There is a general worry in the West Bank that Hamas might launch an assassination campaign against senior Fatah officials like Hamas did in Gaza Strip.

The last events indicate a growing opposition to Hamas, inflamed by Fatah and financed by unknown sources, as a part of an ongoing conflict between Fatah and Hamas in which the last word is not, yet, said.

Although it is very convenient to blame Israel on the economical or humanitarian crisis in Gaza – Israel is supplying more then 70% of Gaza electricity, about 40% of the water, the basic necessary food and medication and provides medical treatment to the hard cases that the Medical system in Gaza cannot handle.

That basic humanitarian support is given despite the commitment of Hamas to put an end to the Jewish State, the daily rocket attacks on Israel, the frequent shelling by mortars of the cross points between Gaza and Israel in an attempt to kill some of the Israelis working there. There is enough money in Gaza to build and maintain the new Hamas army – the “Tanphizya”, to stockpile enormous mount of weapons and ammunition for a possible confrontation with Israel but much more for the inner confrontation HAMAS-Fatah.

It is the pressure of the Palestinian Authority President Mahmoud Abbas, mainly on Egypt, to seal the borders of Gaza and to close Rafah pass in order to undermine Gaza economy and welfare as long as Hamas is in control. Indeed Hamas spokesmen, including the Hamas PM Ismail Haniya, blamed the Mahmoud Abbas’s Fatah regime and not Israel of willingness to starve half of its own Palestinian people in order to overcome the Hamas.

In the inner conflict in the Palestinian society between Fatah and Hamas, especially in Gaza, they used all methods that were considered “crime against Humanity” when Israel could be blamed for and much worse.