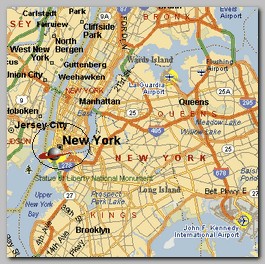 In the last weekend, especially on Saturday 08/11/2007, the New York Police Department stepped up some monitoring activities as a “precautionary measure” in the center of Manhattan. The Police set up barricades to slow traffic and on Saturday were pulling vans and trucks aside to aid in the detection of a possible radiological threat.

The steps of precaution were taken after yet another videotape, an hour long, with Adam Yahiye Gadahn, broadcasted on the web on 08/08/2007. In the video, among other issues, Adam Yahiye Gadahn hinted on possible attacks in the heart of the USA.

According to a Israeli website “Debka Files” with unknown sources and very often unreliable, an unusual activity was detected on the web and an increasing level of e-mails related to Islamic web sites, which can be used also to code massages, mentioned places like New York,  Los Angeles, California, and Miami, Florida, as possible targets.

New York Mayor Michael Bloomberg said, “These actions are like those that the NYPD takes every day — precautions against potential but unconfirmed threats that may never materialize.”

* The last alarm was mainly a storm in a teacup. At the same time it is impossible to neglect the slim possibility of some sort of terror activity.

* The web is a very deceptive domain with endless possibilities and all security services in the world have not, yet, a reliable method to decode the web transportation of communications.