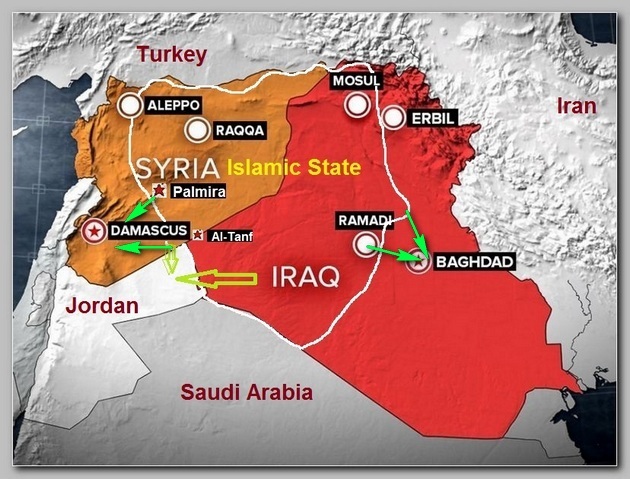 Despite Coalition continues airstrikes and despite the effort to train and arm the Iraqi Army I.S.I.S managed to capture Iraq’s Anbar Province capital Ramadi, on 05/17/2015, as the Iraqi Army scuttled the city leaving behind, as in Mosul less than a year ago, waste quantities  of weapons and munitions, just recently supplied by USA, to the usage of I.S.I.S. Anbar Province is totally Sunni inhabited and ISIS is now controlling all Anbar province, part of neighboring Salahaddin  province and is pushing on toward Baghdad . Practically ISIS controls almost all the Sunni Arab areas of Iraq, 40% of the country. Their main opposition iscnot the Iraqi corrupted and inefficient Army but the Iranian backed Shiaa Militias, brutal and roughless just as ISIS. The Shiaa Militias, the Popular Mobilisation forces. in Arabic the al-Hashd al-Shaabi, proved themselves as a serious threat to the Iraqi Sunni population as such and consolidated most of the Sunnis, especially after the battle for Tikrit, behind ISIS.

By all practical means Iraq is now totally divided between  Sunnis, Shiites and the Kurdish Autonomy.

Three days latter ISIS overrun the City of Palmyra. with its unique archeological antikes. just in the center of Syria, after a week long “siege”. and on Friday 05/22/2015 Islamic State seized the last Syria-Iraq  al-Tanf border crossing, known as al-Waleed in Iraq,  cutting off Syria from Iraq and closing on Jordan from two directions as the push toward Damascus intensifies.

ISIS implements its domination on half Syria, almost half of Iraq, on about 13 millions inhabitants on about 300 thousands successive square k”m (about 130,000 Square Miles) while creating a substantial threat on Damascus, Baghdad, the Jordanian border and almost all military air bases both in Iraq and Syria, especially in Syria. ISIS has several options to proceed with their offensive  while their opponents are in panic and a deep defensive.

The US led coalition airstrikes targets were:
A.–  to deny ISIS mobility and ability to move their forces from place to place, in other words to chain ISIS to the ground :
B. – to contain the threat and to push ISIS to the defence ;
C,  To support local ally ground forces in their effort to fight ISIS.

It is now obvious that the US/NATO Strategy to fight ISIS failed totally in achieving the first two goals and, since it can not be really measured, succeeded partially in the third goal of supporting local ground forces.  USA failed mainly in the understanding that the wars in the Middle East  are not between legitimate regimes against “terrorist”  organizations but religious war between Sunnis and Shiites .

The American response to send, once again, more weapons, more sophisticated and more ammunition to the crumbled Iraqi Army  is not really relevant to the situation. The problem is not the equipment but the men behind it.