ABOUT 500 YAZIDIS KILLED IN IRAQ 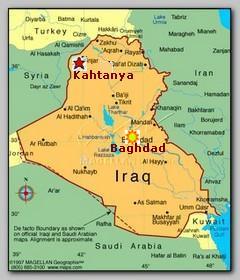 On 08/14/2007, at about 21:00, four fuel tanks loaded with fuel and explosives and driven by suicide bombers exploded in the town of Kahtaniya, West of Mosul in North Iraq. The explosions caused the death of about 500 people, most of them belong to the Yazidi sect. The attack is the most deadly single attack since the beginning of the war in Iraq, in 03/2003, On the same day 9 USA troops were killed in Iraq, another 10 civilians in a suicide attack on a bridge in the northern outskirt of Baghdad and 50 gunmen in uniform kidnapped a deputy oil minister and several other officials.

Yazidi is a Kurdish sect that exists from the 12th century and blends elements of Zoroastrianism, Judaism, Christianity, Islam and other faiths. They are blamed by their neighbors as worshipers of the devil. Their secret belief distinguished the Yazidies from the Sunna’ and the Shyaa’ as well and they are considered to be non Muslims. The Yazidies are living in small villages in Northern Iraq between Mosul and the Syrian border and are estimated to be no more then 300.000.

That attack came amide the new USA army operation “Phantom Strike” in Taji, 30 km North of Baghdad, against both Shiaa’ and Sunni militias and according to USA army commanders the new assault is build on the successes during recent offensives in the capital Baghdad and suburbs.

* Iraq has no functioning government for over half a year. There is no political process from any kind in Iraq. Iraqi society, government, army and police are rapidly crumbling to total chaos – no matter how many USA troops are in Iraq or how sophisticated is the security plan of General David Petraeus, the commander of the USA led coalition forces in Iraq.

* USA army has no answer to the typical guerilla tactic not to confront directly the US army. The insurgency prefers to assimilate in the innocent population or to attack elsewhere, where USA army has no presence, and to wait until the USA will shift its effort to another area. US never had sufficient force to really cope with the security situation in all Iraq all the time. (see IRAQ – VIETNAM)

* IraqI army is much of a fiction, suffers from sectarian loyalty and rivalry, penetrated by Militias activists, affected by low morale and a very high desertion rate (over 20% a year).  In Fallujah, in 11/2004, where only the best IraqI troops were engaged in battle, from one 500 men battalion 330 deserted their mission.

* The main problem is not Iraq but Iran and USA has, in fact, only three options: to cut a comprehensive political deal with Iran, to fight Iran or to leave the problem of Iraq unsolved and return home.