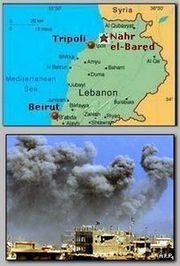 The Palestinian refugee camp Nahr Al-Bared in North Lebanon, close to thecity of Tripoli, has about 40,000 inhabitants, similar to Jenin refugee camp in the West Bank. From Sunday 05/20/2007 the Lebanese Army is engaged in heavy fighting with “Fatah al-Islam”, an Islamic militia in the camp. The battle erupted after police raided an apartment, occupied by militants, in Tripoli. The armed militants resisted arrest and a gun battle ensued.

Today, 08/25/2007, after three months of fighting, the total number of casulties in Nahr Al-Bared between the Lebanese Army and “Fatah al-Islam” is over 300 people. 142 soldiers, more then 100 “Fatah Al-Islam” fighters and about 60 innocent citizens were killed in the conflict. The Lebanese army uses artillery and shelled the camp with hundreds of shells, large part of the Nahr Al-Bared camp is in ruins and its inhabitants are still in temporary shelters outside the camp and it is not, yet, over.

On 08/24/2007 a temporary cease fire was declared in Nahr Al-Bared to enable the evacuation of 25 women and 38 children, the families of the remaining “Fatah Al-Islam” fighters still in the camp.  The estimated number of “Fatah al-Islam” fighters is about 70 fighters out of 360 at the start of the fighting.

Lebanese Security sources said that the evacuation may pave the way for a final assault but the Lebanese army has made predictions of final victory twice before.

So far there is no political demand to investigate the atrocities, civilian massacres and genocide of Palestinians by the Lebanese Army. The Arab League, the European Union or the UN did not convey even once to discuss the humanitarian crisis as was the case in Jenin refugees camp in 04/2002.