THE WANE OF AL QAEDA & THE RAISE OF THE ISLAMIC STATE 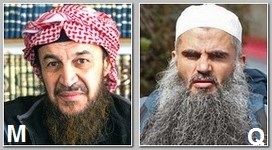 After two more senior Al Qaeda leaders, Mokhtar Belmokhtar and Nasser al-Wehaishi were killed by American UAV missile attacks another former executive leader Abu Muhammad al Maqdisi (M),  the man US terrorism analysts call “the most influential living jihadi theorist” has turned his eye toward I.S.I.S – and emerged, in the last year, as one of the group’s most powerful critics.

He and Abu Qatada (Q) admitted that, eventually, the Islamic State and Abu Bakr al-Baghdadi managed to cripple al-Qaeda through a reportage in the British newspaper w The guardian’ on 06/10/2015.  I.S.I.S has not simply eclipsed al-Qaida on the battlefields of Syria and Iraq, and in the competition for funding and new recruits. According to a series of exclusive interviews with the both former senior jihadi ideologues, I.S.I.S  has successfully launched “a coup” against al-Qaeda to destroy it from within. As a consequence, they now admit, al Qaeda – as an idea and an organisation – is now on the verge of collapse (see also – ISIS Sinai Campaign 02.15 ).

Al-Maqdisi counts the leader of al Qaeda, Ayman Al Zawahiri, as a personal friend, and an highly respected spiritual guide. “When Zawahiri sends a message to Yemen, he knows his orders will be obeyed” al-Maqdisi said.  But there are also a sign that al Qaeda, once the world’s most feared terrorist network, knows it has been surpassed.