AN ORDINARY DAY IN AND AROUND GAZA 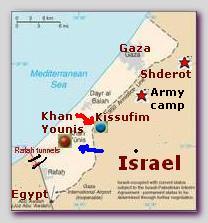 Thursday 09/06/2007 was a normal day on the border with Gaza. In the morning a Qassam rocket exploded near a school in the border town of Shderot. Since the parents in Shderot closed the schools as a defensive protest against the Israeli government, that is not providing the minimum necessary security – nobody was hurt.

At the same time an Israeli force operated inside Gaza Strip near the Southern town of Khan Younis looking for tunnels that the Palestinians dig in order to penetrate the border into Israel. In the clashes with the “special operational force” of Hamas – called by the local people “Tanphizya”- 4 armed Palestinian were killed and a Israeli officer lightly wounded.

Few hours later a mixed Palestinian force of the PALESTINIAN Islamic Jihad (PIJ) and Al-Aqsa Martyrs Brigades, approached an Israeli Military outpost near Kissufim, on the Israeli side of the border, in an attempt to attack the outpost and to kidnap another Israeli soldier. The attack was foiled by helicopter gun ships. 6 armed Palestinian were killed and 10 more wounded. From the 6 killed – 5 were Fatah members supposed to be loyal to  Fatahland President Mahmoud Abbas in the West Bank.

In the evening the Hamas fired a barrage of 9 mortar shells toward an Israeli army camp near Gaza border. One Israeli soldier was lightly wounded.

**Just another ordinary day on the border with Gaza.