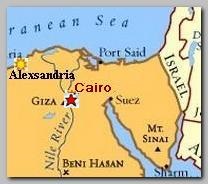 A car bomb exploded, on Saturday 07/11/2015 morning, outside the Italian consulate in Cairo on, killing one and wounding at least five people,

Medics at the site of the blast told Agence France-Presse that the explosion wounded two policemen stationed outside the consulate and three passers-by ( see also – Cairo 11.24.10 ).

The blast partially destroyed the facade of the consulate building.  There was no immediate claim of responsibility for the explosion.  Islamist militants seeking to topple the government have claimed responsibility for roadside bombs and suicide bombing attacks.   No group has yet said it carried out the attack.

It is the second major blast in Cairo Egypt in two weeks,On 07/29/2015 Egypt’s State prosecutor Hisham Barakat was also killed by a car bomb in a well protected neighborhood of Cairo.   In the last month, the month of Ramadan, another car bomb targeting a police station left three people dead.

* The impact of the bomb ismainly a moral blow to the current regime.

** The Islamic State (ISIS) said, few hours later,  it takes responsibility for the attack., SITE Intelligence Group reported.  A tweet from a Twitter account linked to ISIS said Muslims should stay away from sites like the consulate, as they are “legitimate targets” for strikes.