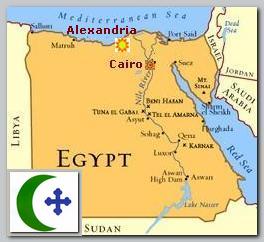 On Friday 09/21/2007 riots broke out in Alexandria, the second largest city in Egypt, between Copts (7% 0f the population) and Muslims. Dozens of youngsters form both communities were pounding each other after Muslims claimed that a young Copt tried to convince a young Muslim girl to come to his home. 9 people were wounded in the riot and 25 were arrested by the Egyptian police – 17 Copts and 8 Muslims.

In 10/2005 three people were killed in Alexandria after the Muslims claimed that a show in a Copt church cast doubt on some of the sentences in the Muslim Holy Qoraan.

The Copt church in Egypt is one of the earliest Christian churches in the World. Generally, through history, the relations between Copts and Muslims were correct as the Islam was very tolerant toward Christians and Jews.

In the last decades, with the radicalization of Islam, Christians all over the Middle East suffered harassments and discrimination and emigrated, in large numbers, to other places in the world. So is the case with the Maronites in Lebanon, the Nestorians in Iraq or the Christians in the Palestinian Authority.

The Alexandria event is a minor event in the violent Middle East, one of many which represent the current radicalization and  mistrust of the Muslim World toward non Muslims, especially Christians and Jews.