4 HAMAS, ON THEIR WAY TO IRAN. SNATCHED BY EGYPTIAN FORCES 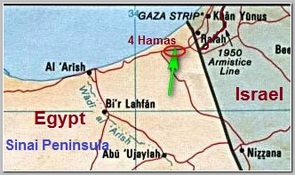 Four members of Hamas’ armed wing were abducted in Egypt’s Sinai Peninsula on Wednesday 08/19/2015 night, after the bus they were on was stopped by unidentified gunmen, sources close to the Palestinian group and Egyptian security officials said.

Their  bus with about fifty Palestinians on it was travelling from Rafah on the Egypt-Gaza border to Cairo airport when it was ambushed, the security sources said initially blaming the local Sinai ISIS Branch for the seizure.  .The bus was carrying 50 passengers. Officials said the kidnappers were wearing “Pakistani-type” clothes. Some militants in Sinai dress in tunic-style fatigues that are common in Pakistan and Afghanistan.

All busses from Rafah crossing are always escorted by armed guard  Furthermore It is hard to believe that on the main road between Rafah, through El-Arish to Ismailia, with a very heavy presence of police and army they had the time to check ID of 50 passengers without any report of any sort of exchange of fire following the event. According according to egyptian sources more than 6,000 crossed from Gaza, through Rafah to Egypt in the past 4 days. probably because the Eid al-Adha and other humanitarian reasons . It means the Egyptian authorities had confidence in securing the single road from Gaza to Cairo, all the other 6,000 arrive unharmed to Cairo including  those four Hamas operatives. They were singled out and only the Egyptians had the specific information about the specific bus they were traveling  So it was obvious that the Hamas was blaming Egypt for the abduction of its members.

According to the Times of Israel, the 4 Hamas commandos–Abed Al-Daim Al-Bassat, Said Abdullah Abu Jbin, Yasser Fathi Zanun and Hussein Hamis al-Thbada–entered Egypt through Rafah crossing,on their way, via Cairo Airport to Iran, for special training  but the Egyptian intelligence officials took them into custody. Egypt, however, did not release any statement on the allegations.

Egypt learned of this plan ahead of time (and it would be interesting to know where from), and decided to arrest the quartet.

* If so it is almost certain that the information was received from Israel  since Israel has good sources in the Hamas and in Iranian al-Quds force. It is, most likely an example of cooperation between Egypt and Israel (probably also Saudi Arabia ) in confronting the Iranian subversion. The event has serious implications on the relation between Hamas and Egypt, Egypt and Iran and Hamas with the other Sunni countries. It also shows the growing cooperation between Israel, Egypt and Saudi  Arabia in a new axis in the Middle East – the axis of stability whose first appearance was in shaping the end of operation “Protective Edge’ in summer 2014.