TURKEY TRAPPED IN ITS NEW WAR 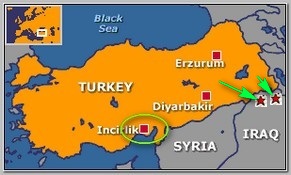 Following Turkey’s new war against the Kurds and the escalation of violence the Turkish Security forces suffered from mounting number of casualties reaching the average of about  8 killed personnel a day by 09/2015.

On 09/08/2015, after series of heavy airstrikes in Northern Iraq, actually the Kurdish Autonomy, 2 units of the Turkish special forces, supported by warplanes, crossed into northern Iraq to chase in “hot pursuit” two 20-strong groups of alleged PKK militants after an attack that left 16 soldiers dead on Sunday 09/07/2015. the Turkish Dogan news agency reported. “This is a short-term measure intended to prevent the terrorists’ escape.” a Turkish government source told AFP.

In the wake of the attack, Turkish president Recep Tayyip Erdogan, who provoked the new Turkish-Kurdish war just 7 weeks earlier,  vowed not to abandon the country to “terrorists”.

Last Turkey’s election on  06/07/2015  were a blow to Erdogan and a victory for Kurds. Turkey is since in a political limbo   Despite Erdogan intentions the new war with the Kurds  seen  backfiring at polls .

President Erdogan, who faces  new elections on 11/01/2015 is looking to boost the Turkish patriotic sentiment in Turkey and, at the same time, to delegitimate the Kurdish party in the Parliament .

Hundreds of people protests against the PKK in Istanbul, and in other cities in Turkey  on Sunday 09/07/2015r after the PKK killed 16 soldiers and wounded six others a in the southeastern province of Hakkari  but relative to Turkey it is negligible .

The Kurdish Peshmerga, although not cooperating with the PKK, is considered the most efficient fighting force against I.S.I.S, Since both are Kurds  no doubt they support each other and the Turkish offensive will, somehow, to compromise the efforts to fight regionally I.S.I.S ( see – 09.2015 RUSSIA BACK ).