STATE OF EMERGENCY DECLEARED IN PAKISTAN !!! 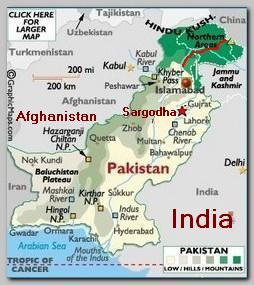 In Pakistan a CIVIL WAR is practically conducted between pro-Taliban Islamic Militants and the pro-American Pervez Musharraf’s regime.

Generally speaking the performance of the Pakistani army is poor and the army suffers from desertion and low moral. The militants are on the offensive while the army is on the defense. Just few days ago the Army was forced to accept a cease fire with Maulana Fazlullah a powerfully pro-Taliban leader in the Northern Swat valley after PAKISTANI army sent 2,500 paramilitary troops, backed by artillery and air raids, to gain control on the region.

On 11/01/2007 morning a suicide bomber has rammed a motorcycle into a bus carrying Air Force employees, near Sargodha Airbase in Pakistan’s Punjab province, killing at least five people and wounded about 40.

The CIVIL WAR in Pskiatan is slowly crawling from the remote North West and the border areas with Afghanistan to the south and the center of Pakistan and very soon the Pakistani regime, if he wants survive will be forced to use drastic measures such as military martial law and suspending of human rights.

In no time the Pakistani nuclear bomb can be turned to be an Islamic nuclear bomb in the hands of a most extreme Islamic regime.

There is not, lately, more dangerous event in the world then the turmoil in Pakistan.