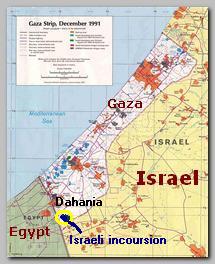 There was never a shortage in Gaza strip of light guns, ammunition and explosives but there was a need for more heavy weapons to cope with Israel. The Palestinians fired toward Israel thousands!!! Home-made Qassam rockets rather then the more efficient Katiusha rockets, there was almost no anti tanks or anti air means and no mortars or standard military mortar shells.

According to Israeli intelligence sources a large scale tunnel system between Gaza and Egypt is providing, in the last months, the Hamas with much more heavy, dangerous and sophisticated weapon systems. Anti tanks and anti air missiles, mortars, large amount of appropriate ammunition and a quantity of long range Katiusha rockets are smuggled from Egypt to Gaza. The weapons enable the Hamas to hit targets deep in Israeli territory using the same strategy of Hizbullah in Lebanon.

The smuggled weapons are funded or manufactured in Iran and send to the Egyptian side of the border with Gaza all the way from Sudan. Indeed, in the last weeks, the shelling of Israeli military positions or patrols, on the Gaza border, with mortars by the Palestinians became routine. In several occasions, in the last week, a well coordinated barrage of mortar shells was fired, in growing accuracy, on Israeli villages

On 10/31/2007 night Israeli forces raided Dahania area in southern Gaza strip about 1.5 km inside the Palestinian territory. The purpose of the military operation was to uncover the Palestinian tunnels system from Gaza to Egypt. The forces found 7 operating tunnels. Since the border between Gaza and Egypt is 16 km long and the Western side is sandier and easy for digging tunnels, it is a fair estimation that there are 70-100 active tunnels from Egypt to Gaza.

Although it is impossible to stop completely any smuggling to Gaza, it is impossible to operate such a large system of tunnels with such a big amount of materials, especially more heavy weapons, from such a far distance as Sudan, without the full consent and even cooperation of the Egyptian authority.

The Hamas in Gaza is deliberately escalating the situation in order to disrupt, as much as possible, the USA led initiative of peace talks between Israel and the Fatah government in the Palestinian West Bank. The support, given by Egypt to the Hamas in Gaza, in now days, suggest that Egypt, which was very skeptical about the USA move from the beginning, believes that there can not be stability on Egypt border and in the Middle East by ignoring or neglecting the Hamas. Egypt has the same interests as Hamas to cause failure to any possible peace talks between Israel and the Fatah regime that exclude the Hamas. ( see also – THE INEVITABLE )