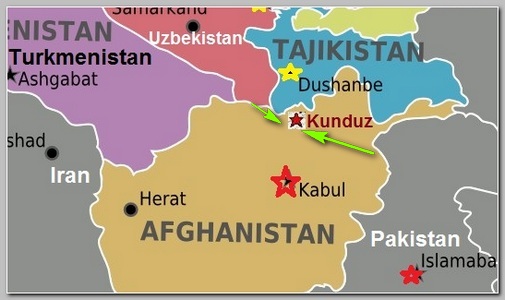 Kunduz is a strategic town in Northern Afghanistan on the border with Tajikistan and close to Uzbekistan where the Uzbek Islamic Movement – IMU is a close ally to the Taliban. Kunduz is under partial siege by the Taliban for months.

On Monday 09/28/2015 early-morning hundreds of Taliban fighters have carried out an raid on Kunduz i, entering the northern city from three different directions, media sources t\reported.   Initially the raid was attributed to the local branc of the Islamic State and a bitter rival of the Taliban (see also – Ghazni Jailbreak ).

At least eight people, including police officers, have been killed, and 50 others wounded.

Kunduz City was in lockdown on Monday as security forces attempted to fight back and heavy fighting continues across the city, roads had been blocked and some police stations within the city were surrounded by Taliban fighters. There have been reports that the provincial council building has been seized.

The armed fighters have also reportedly taken control of a 200-bed hospital in the city following the raid on Monday, a Taliban spokesman and a police source told Reuters.

Moein Marastial, a former parliament member from Kunduz, told Al-Jazeera T.V Network that a university in Kunduz has also been taken over by the Taliban.  He said the Taliban has gained the support of Kunduz residents, who were unhappy about local government corruption.  Taliban fighters are reportedly searching houses in the city looking for government officials.

Kunduz police spokesman Sayed Sarwar Husaini told the BBC’s Mahfouz Zubaide that militants had captured the jail in Kunduz and freed about 500 prisoners, including members of the Taliban.