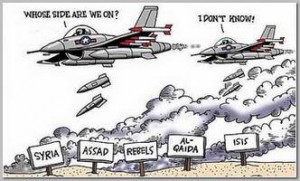 As hundreds of Iranian Revolutionary Guards and Lebanese Hizbullah gather in Syria for a counter attack , with Russian air support from their base in Latakia it was reported, on 10/14/2015, that even Cuban army elements arrived to Syria  to advise, provide technological support and, according to intelligence sources, to man Russian-made tanks to aid Damascus in fighting rebel forces backed by the USA.

On 10/11/2015 night  USA air dropped 50 tons of  ammo to pro-American (as if there are really pro-Americans in Syria) Syrian Rebels. USA also claimed repeatedly that the Russian effort is focused not on the Islamic State but on so called ‘Moderate Rebels” which includes also  Al Qaeda element – the Jabhat al-Nusra front.

Mean time, under heavy Russian air strikes the “moderate” coalition of rebels – the ‘Army of Conquest’ -loses ground to I.S.I.S near and around Aleppo.

UK is considering seriously to expand its military airstrikes against ISIS to a more meaningful military intervention in Syria, mainly to contain the Russian military expansion .

To sum it up – Syria is no longer a local civil war, nor a regional conflict in the Middle East – it becomes a world wide confrontation between the former “Axis of Evil” and the Western powers as nothing was really changed in the last 30 years. In other words – it is the price of worldwide political vacuum created by USA in the last years.