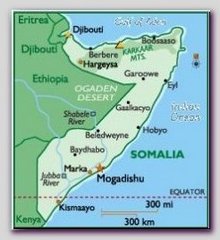 The ungoverned places in the world are the safe haven for the Global Jihad. From areas like the remote mountains in Afghanistan or Yemen, in the vast tribal region between the borders of Libya, Chad, Algiers and Nigeria and in Somalia – terrorists found refuge and a place to recover and plan the next move.
The attackers on The USA Embassy in Kenya and Tanzania on the 08/07/1998 found refuge in Mogadishu, the capital of Somalia, and in Somalia at large.  From Somalia these terrorists stroke again on 11/28/2002 in Kenya and attacked a local hotel and an  Israeli commercial flight when taking off in Mombasa Paradise attack. Most of the offenders  escaped to Somalia after the attack. According to intelligence sources men like Saleh Ali Nabhan that participated in the Mombasa Paradise attack, Fazul Abdullah Mohammed – the mastermind of the 08/07/1998 Embassy attacks and other top terrorists, found refuge in Somalia.
Somalia is traditionally divided between Muslim tribes which fight each other constantly – similar to the situation in Afghanistan, without a really legitimate government.  In July 2006 an extreme Muslim group that called itself “Council of Islamic Courts” (CIC), led by Sheikh Dahir Aweys, took over most of the southern part of Somalia and raised the fear of increased Muslim terrorist activity in the Horn of Africa.
Ethiopia is a Christian neighbor country. In the beginning of December 2006 Ethiopian troops, probably encouraged by USA, invaded Somalia to help the legal government, so to speak, to restore law and order. Within few days they entered Mogadishu and the southern town of Kisamaayo. The USA involvement was uncovered when on the 01/05/2007 Somali officials revealed that USA navy blocked the sea. This measure was to prevent the top commanders like Sheik Sharif Ahmed from the “Council of Islamic Courts” (CIC) to flee when ground Somali and Ethiopian troops were closing in on the southeast of Somalia.
A day earlier Ayman Al Zawahiri, the active leader of Al Qaeda, said in an audiotape broadcasted on the internet: “I speak to you today as the crusader Ethiopian invasion forces violate the soil of the beloved Muslim Somalia,” urging the Muslims in Somalia to fight the Ethiopians and Americans in the same methods as in Iraq and Afghanistan, including suicide bombers. In response, on Saturday 01/06/2007, a crowd of thousands took out to the streets of Mogadishu threw stones and protested against the Ethiopians’ presence in Somalia.  Ethiopian troops responded by firing into the air.
The Ethiopian – Somali war is just another chapter in the war with the global Jihad. War fought by proxies of USA and is about to be another version of Iraq or Afghanistan, only without American or European troops and far from the international media, so we will not see or  hear about it every day on the news .

On 01/13/2009, the last Ethiopian soldiers left Somalia after the Ethiopian regime became despaired form the endless intrigues and the total inefficiency of the Somali regime.

Islamic militants from the Council of Islamic Courts (CIC) and ‘al-Shabab’ militia took over most of the Ethiopian Army bases including four of the six bases in Somalia’s capital Mogadishu.

Since early 2007 more then 16,000 Somali civilians were killed in the fighting and over one million, most of them from the capital Mogadishu, became refugees in their own country. Few hundreds Ethiopian soldiers were killed too in the ongoing fighting (see – Triple disaster ).