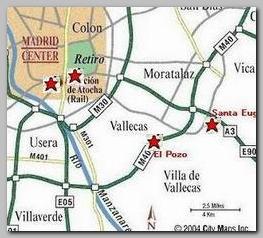 On the morning of 03/11/2004, in the middle of the rush hour, at about 07:30, 10 bombs exploded, almost simultaneously, in the train system of Madrid, the capital of Spain. All the bombs exploded in Central and Southeast Madrid, in and between Atocha station, in the center of the city, and Santa Eugenia and El Pozo in the suburbs. 191 people were killed from the blasts and hundreds were wounded.

The bombs were hidden in backpacks that were left behind in the trains and made from explosives stolen in 02/2004 from quarries in the mountains north of Madrid by a local offender, Jose Trashorras. Later the car driven by Jamal Ahmidan and the stolen 110 kg dynamite was stopped by the police for a routine check. Since the car was not stolen and the explosives well hidden in the car, the police released the car.(*) Four from the ten men that later placed personally the bombs in Madrid trains were on the car at that time.

Immediately after the attack the Spanish P.M Jose Maria Aznar blamed ETA, the Basque terror group, for the event.  Nevertheless ETA always gave warning to the authorities enough time ahead about their bombs so there was time to evacuate the public from the arena.

Two days after the attack on 03/13/2004 the Spanish police arrested Jamal Zougam, a follower of Imad Yarkas, on suspicions that he was one of the ten men that planted the bombs in Madrid Trains.  In the general election on 03/14/2004 a new socialist government was elected that pulled out the Spanish troops from Iraq within six months.

On 04/03/2004 the Spanish Police succeeded to locate in Leganes, a southern suburb of Madrid, Nine of the most wanted terrorist that, they believed, committed the attack. When the police closed on their hideaway they committed suicide and blew themselves up. Six were killed and two managed to escape. Since they were key figures in the plot, the Spanish police faced extreme difficulties to complete the investigation and it is still unknown today (02/2007) if the order came from Al Qaeda in Pakistan or it was a local initiative.

With time Spain managed to arrest most of the people involved in the case. Rabei Osman Ahmed , one of the planners of the attack, was extradited from Italy, Youssef Belhadj from Belgium and one, Amer Azizi, is still in large and wanted.

On 02/15/2007 began the trial of 29 defendants for committing the Madrid Trains bombing attack. Eight were accused of direct involvement in the event and the others in assisting the attack directly. From the 10 men who placed the bomb, two, Jamal Zougam and Abdelmajid Bouchar, who managed to escape from Leganes, were accused in court, six killed themselves in Leganes, one, Mohammed Afalah, blew himself later in Iraq. Against the 10th one, Basel Ghalyoun, there was not enough evidence and he is accused on other charges.

The deeds or whereabouts of two fugitive brothers from Moroccan descent Mohammed and Rachid Oulad Akcha, who, according to the Spanish authorities, placed 2 of the 10 bombs that exploded in the attack, remains unknown.

Note – (*) Since Jose Trashorras and his middle-man Rafa Zouhier, who sold the explosives to Jamal Ahmidan, were both police informants, it is quite impossible to believe that the police stopped the car accidentally. It is reasonable that the police did not want to expose their source of information by searching the car much more systematically without a legal reason.

* There is very little evidence to suggest that the initiative for the Madrid Trains bombing came from the leadership of Al Qaeda in the borders’ mountains between Pakistan and Afghanistan. Contrary to that there is much more evidence to connections with Abu Musab al Zarqawi, the leader of Ansar al Islam in Iraq.

* The infrastructure of the Madrid Trains bombing was based on the Moroccan Islamic Combat Group (CICM) and is very similar to the infrastructure of the Casablanca Bombings on 05/16/2003.  Although Ansar al Islam in Iraq and Moroccan Islamic Combat Group (CICM) were inspired strongly by Al Qaeda concept they were not the Al Qaeda. They had, at 2004, their own leadership, chain of command and their own apparatus to carry out such an attack.

* All evidence show that the attack was provoked mainly because the presence of Spanish troops in Iraq, and most annoying, in alliance with the Big Satan, in Muslim eyes, the USA.
* Related topics –