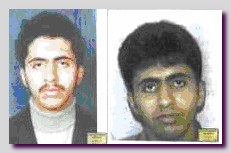 According to some sources Mohand al Shehri fought in Chechnya in 2000 with Hamza al-Ghamdi – a member of his flight 175 team. It is known that Mohand Al-Shehri flew back from Iran through Kuwait with Hamza al-Ghamdi on late 10/2000. On 10/23/2000 Mohand Al-Shehri applied for a visa to USA in Jeddah.
.
Mohand al Shehri arrived in USA on a flight from London with Abdulaziz al-Omari, a muscle hijacker from flight 11 team, and his team member Hamza al-Ghamdi ,  immediately moved to Delray Beach, Florida. Like other 9 hijackers, Mohand al Shehri opened a local-bank account in Sun Trust Bank, Florida.
.
On night of 09/10/2001 Mohand al Shehri shared a room in Milner Hotel, Boston, Massachusetts, with Fayez Banihammad, Satam al-Suqami from flight 11 team and Marwan al-Shehi a Hamburg Cell member and the pilot hijacker of his flight 175 team.
.
Mohand al Shehri boarded flight 175 the morning of The 9/11 without problem.
Please Share...