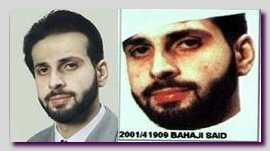 Said  Bahaji was born in Morocco to a Moroccan father and German mother in 1974. In 1983 all the family moved to Germany. Therefore Said  Bahaji was a German citizen by birth.

Said  Bahaji came to Hamburg in 1995 and enrolled to electrical engineering program in the local technical institute.

In 1996 Said  Bahaji was recruited to the German army but was discharged because of medical reasons after six months.

Although Said  Bahaji grew in a secular family, after his army service, he became gradualy closer to Islam, probably through his acquaintance with members of the Hamburg Cell in his institute.

In 08/1998 Said  Bahaji was questioned by the German security services about his connection with Mohammed Haydar Zammar known as a radical Muslim activist cleric. On 11/01/1998 Said  Bahaji moved in Hamburg to a new apartment with future The 9/11 hijacker Mohamed Atta and another member of Hamburg Cell , Ramzi Binalshibh . That apartment served along the time nearly all members of the cell.

In the Hamburg Cell Said  Bahaji was in charge of the coordination with Al Qaeda cell in Spain through Mohamed Belfatmi.

In 10/1999 Said  Bahaji married in Al Quds Mosque, also known as Taiba Mosque, in Hamburg in a Muslim ceremony. The footage taken in the ceremony provided a unique opportunity to record all future most dangerous The 9/11 hijackers and other terrorists from Hamburg Cell together: Mohamed Atta, Ramzi Binalshibh, Mohammed Haydar Zammar, Marwan al-Shehi , Ziad Jarrah and others, all attended this wedding.

After telling his employer that he is going to Pakistan for an internship in a software company Said  Bahaji left Germany for good on 09/04/2001, just a week before The 9/11,  He flew with Mohamed Belfatmi on the same flight to Karachi.

In Karachi, Pakistan Said  Bahaji and Mohamed Belfatmi shared their first two days in the country with other two persons that came with them from Europe: Abdellah Hosayni, a Belgian citizen and Ammar Moulla from France.

Said  Bahaji traces are completely lost after he left to Pakistan and today (02/2007) it is a mystery what happened with him. He is on the most wanted list of German authority.

* Said  Bahaji’s passport was found, eventually, during Waziristan-Offensive in the village of Sherwangi, one of the Tehrik-e-Taleban strongholds in FATA region where there are strong links between Taliban leaders and the “core” Al Qaeda, the Pakistani army reported on 10/29/2009. The army said the passport was recovered along with weapons, equipment and supplies. The last stamp in the passport is from 09/04/2001, a week before The 9/11, when Said  Bahaji entered Pakistan through Karachi international airport.

The Pakistani army also found the student card of Raquel Burgos Garcia, 34, a Spanish convert and the wife of Amer Azizi. Raquel Burgos Garcia is not believed to have taken direct part in any terror activities but has been used as a courier. She is thought to be the holder of a number of other passports.