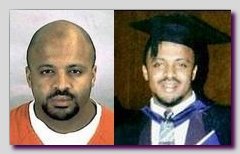 * Zacarias  Moussaoui, a French citizen, was born in south west France to a family of Moroccan descent on 05/30/1968. His mother raised him and other three brothers alone on a house cleaning salary. Although Zacarias  Moussaouis’ family was Muslim he grew in a moderate and tolerant atmosphere. According to his family Zacarias  Moussaoui was sensitive to racism that he faced in France against foreigners and Muslims in particular.

Zacarias  Moussaoui was expelled from the Mosque because he became too extreme in his behavior and speaking too much about Jihad. After a while Zacarias  Moussaoui found himself another Mosque – the Finsbury Park Mosque , run by the radical Imam   Abu Hamza al-Masri. At that time, 1996, the French security service began to monitor his movements.

Zacarias  Moussaoui came to USA the first time in 02/2001.  Between 02/2001 to 05/29/2001 Zacarias  Moussaoui   attended in Airman Flight school in Norman, Oklahoma, but failed to receive a pilot license. Later Mohamed Atta , the pilot hijacker from flight 11, and Marwan al-Shehi , the pilot hijacker from flight 175, took lessons in the same Airman Flight School.

Because Zacarias  Moussaoui asked too many suspicious questions about fuel of the aircraft and its’ weight and expressed radical ideas he was reported to the FBI by his flight instructor Clancy Prevost. On the morning of 08/16/2001, three weeks before The 9/11, the FBI raided his apartment, confiscated his computer and arrested him for questioning.  The FBI did not find a legal excuse to search his computer and he was charged only on immigration violation.

After The 9/11 on 12/11/2001 Zacarias  Moussaoui was indicted on six felonies of conspiracy to commit acts of terror. During the trial Zacarias  Moussaoui behaved in a fickle manner, changed his story several times but admitted to be an Al Qaeda member and that he was a part of a plan to crush an airliner into the White House. In the search in his computer after The 9/11 there were no clues about The 9/11 .

Zacarias  Moussaouis’ trial began in 10/2002 in Alexandria, Virginia. He was found guilty and was sentenced to life in prison without parole on 05/03/2006.

Was Zacarias  Moussaoui the 20s hijacker ?