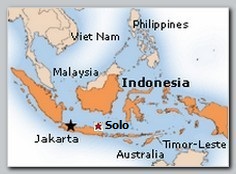 Indonesia’s National Police chief General Badrodin Haiti, on Monday 12/20/2015, authorities, with Australian intelligence help, has neutralise an I.S.I.S-inspired terror plot in Indonesia and 9 people are being interrogated after raids in five Indonesian cities prompted by intelligence from Australia, the USA and Singapore.

They were using the code word ‘concert’ and chemicals were seized, but the details of their plot were not fully known, suggesting the plot was. yet, in its early stage ( see also – Palu Market Bombing ).

Police officers and the national police headquarters were among their targets General Badrodin Haiti said, as well as ‘vital objects’ – buildings or infrastructure – which he wouldn’t name.

Gen Haiti’s comments followed the first Indonesia-Australia Ministerial Council on Law and Security, which brought together ministers, and the national police and intelligence bodies.

Indonesia, with the world’s largest population of Muslims, has successfully dismantled terror networks since the deadly Bali bombings, which targeted foreign tourists.

Indonesian authorities are still hunting for suspects but among those in custody so far are a teacher from an Islamic boarding school and a student, named as Zaenal, who is thought to have planned to be a suicide bomber in one of the attacks

It’s believed a map of the greater Jakarta area was among the items seized in the raids, along with bomb-making materials including detonators and chemicals, as well as jihadist manuals.

A black flag inscribed with text ‘similar to an ISIS flag’ was allegedly found at the home of the teacher, identified as 31-year-old Asep Urip, who allegedly received funds from Indonesian militants who are joining the Islamic State group in Syria, national police spokesman Maj. Gen. Anton Charlian said at a separate news conference.

Their interrogation led police to arrest several other suspects who had been sought since a raid on their bomb-making factory in Klaten town last year (2014) , he said.

Of at least 800 Indonesians who have travelled to the Middle East to join ISIS, more than 100 have returned to Indonesia, Gen Panjaitan said last month.

Security was raised at airports, the presidential palace, foreign embassies and shopping malls, and the government said it will deploy more than 150,000 personnel to safeguard public places and churches across the country.
.
.