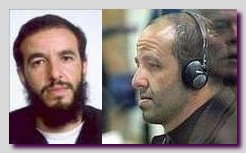 A day after the Madrid Trains Bombing on 03/12/2004, in one of the sites searched by the Spanish Police a videotape was found, alongside with 30,000 EURO. On the tape a veiled man, with two other veiled figures alongside, is taking responsibility on the attack and warns Spain to withdrawal her troops from Iraq otherwise Spain must expect more attacks. The speaker, with a Moroccan accent, identified himself as Abu-Dujanah al Afgani – Al Qaeda leader in Europe – later identified by the police as Youssef  Belhadj .

Youssef  Belhadj, brother of Mimoun Belhadj , was born in Morocco in 1976 and lived in Molenbeek near Brussels, Belgium. He had frequent phone connections with Abdelmajid Bouchar a year prior to the Madrid Trains Bombing.  OIn the eve of Madrid Trains Bombing Youssef  Belhadj, an activist of the Moroccan Islamic Combat Group ( CICM ), was in Madrid, Spain, assumed to have stayed with his nephews Brahim Moussaten and Mohamed Moussaten in the Madrid suburb, Leganes, to inspect the last stage of the attack.
Youssef  Belhadj was arrested for the first time days after the Madrid Trains Bombing in Belgium but was released on condition in 06/2004 because lack of evidences. He was put under surveillance and rearrested on 02/02/2005. He was extradited to Spain on 04/01/2005 in timing with the arrest of other 13 terror suspects, members of Moroccan Islamic Combat Group ( CICM ), all over Spain (see – Haddad-Brothers). Prosecutors say they have evidence that he made such key decisions as picking the day of the attack and giving the plotters last minute instructions.

* It seems to be that the Spanish authority, in coordination with the Belgians, deliberately delayed Youssef  Belhadj s’ arrest to enable the security services in Spain to expose all his connections to other potential Islamic terrorists in Spain.
* Related topics –
************************************
Read more ;
Please Share...