RUSSIA TO STAY IN SYRIA ‘INDEFINITELY’ 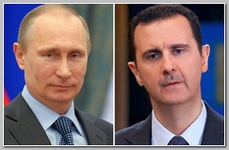 Newly published details, on Sunday 01/17/2016,  of the deal, signed on 08/26/2015, before Russian airstrikes in the country began, suggest Moscow may maintain a long term military presence in the Middle East

Details of the agreement regulating the Russian-Syrian military alliance emerged as Moscow announced its mission in the country would now include “humanitarian In public statements, Russian officials have said the deployment will continue only until regime forces complete “offensive operations” and against Isil and other rebel groups.operations”, a term that appeared to refer to aid drops over regime-held territory.

It seems no lesson was learned from the previous war of Russia in Afghanistan, which lasted 10 years from 1979 to 1989,