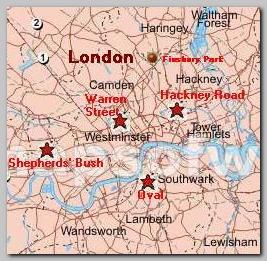 On 07/21/2005, just two weeks after the London 7/7 terror attack, at noon, at about 12:20 local time, three small explosions occurred in the underground train system in London. The explosives were left behind in rucksacks causing small explosions in the Tube stations in Warren Street, Shepherds’ Bush and on bus no’ 26 near Oval Station in South London.

About that time a fourth bomb went off, partially, on the back of another offender, near Hackney Road. Nevertheless he managed to escape despite his wounds.

A day later, on 07/22/2005, under the tensions that the attack created, the police followed a suspect from South London who lived in an apartment in Scotia Road, near Stockwell, that was under surveillance. The suspect drew the attention of the police as despite the hot summer day he was dressed with a winter coat. The police was sure that the man, with a dark skin, is a suicide bomber too and tried to arrest him In Stockwell Station in South London. Eventually he panicked tried to run away and was shot down. Three of the suspects of the 7/21 bombing came from Stockwell neighborhood and used the station the morning of the London  7/21 . The man, identified later as a Brazilian, Jean Charles de Menezes, was an innocent by passer and the only victim of the failed London 7/21 Attack.

On 07/23/2005, two days after the attack, the police found a fifth rucksack thrown away in North West London in Wormwood Scrubs which the police found out later belonged to Manfo Kwaku Asiedu, age 32 and a cell member from Finsbury Park, North London.

After a short investigation the London police arrested on 07/27/2005 in Birmingham Yassin Hassan Omar who, they believed, placed the bomb in Warren Street. Yassin Hassan Omar regularly attended in Finsbury Park Mosque where the radical Muslim cleric Abu Hamza al-Masri was preaching.

On 07/29/2005 the London police arrested Muktar Said Ibrahim, the ring leader and the bomber from bus line no 26 that exploded in Oval Station. Muktar Said Ibrahim regularly attended in Finsbury Park Mosque. He also boasted that he recruited Hussain Osman, the bomber of Shepherds’ Bush, and convinced him to join the attack “because of the war in Iraq”.  Hussain Osmanmanaged to flee UK to Italy and was arrested at the same time in Italy.

On the same day, 07/29/2005, the police in London arrested also Ramzi Mohamed, the Hackney Road bomber, and his brother Wahbi Mohamed.  Manfo Kwaku Asiedu, the fifth bomber who was with the Mohamed brothers in the apartment, was arrested too.

Another suspect Adel Yahya was arrested in Gatwick airport on 12/19/2005 when he returned from Ethiopia, and was charged of conspiring with the five others to cause explosions on the 07/21/2005. Adel Yahya regularly attended also in Finsbury Park Mosque.

The police revealed that the explosives in four of the five bombs were a home made Triacetone Triperoxide.  (–  Triacetone Triperoxide is commonly used by the Palestinians in their terror campaign against Israel –)  that was mixed in a sloppy way and was stored  too long. Two of the bombs – Yassin Hassan Omars’ bomb in Warren Street and the bomb found in Wormwood Scrubs on 07/23/2005 were with nails to increase the damage.

The police arrested also 11-suspects, relatives and friends, who helped the terrorists to escape and withheld necessary information from the police, before and after the London 7/21 attack.

Senior mosque figures in south London claimed that they told police a year ago (2004) that they were worried about some Islamic extremists that had come to the area, after the Finsbury Park Mosque was closed down.

* The attack was a spontaneous initiative of local London Muslims from East African descent, some of them with a criminal background, some of them stayed in UK illegally. There was no connection between the terrorist offenders to any terror organization.

* There is no doubt that the leading persons in the cell were influenced by the preaching of Abu Hamza al-Masri in Finsbury Park Mosque. There is no evidence that Abu Hamza had any idea about the attack.

* The suspects shared their plan with members of family. All the preparations were very amateur and superficial. It is the main reason that the attack failed.

* The war in Iraq and the London 7/7 attack were probably the direct motivation and the main factors of the timing.

* The fact that they acted on their own protected them from premature exposure.  The London  7/21 attack demonstrated the motivation, the ambition and the solidarity among the Muslim community in London to continue and carry on such attacks.