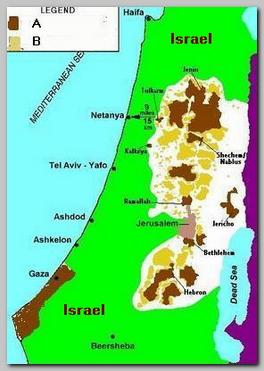 The term Palestinian as referring to the Arabs between the Jordan River to the Mediterranean is relatively new – from the beginning of the 20th century.  Only after Oslo Accord of 09/13/1993 the Palestinians got for the first time in history a partial sovereignty over a very small part of the Western Bank of the Jordan – the Palestinian  Authority.

Today (04/2007) the Palestinian  Authority sovereignty stretches on about 1200 km (A): 360 km in Gaza strip and in 12 enclaves in the Western Bank. Another circa 1500 km (B) are under full civilian Palestinian sovereignty but Israel has still a limited right to military operations according to security needs. About 4,000 km are still under negotiation. There are about 3 million Palestinians in the Authority, more than 80% of them are living under full Palestinian rule.

In 1936, with the awakening of Nationalism in Europe, when the Palestinians rose up against the UK and the British mandate over Palestine they called the uprising “The big Arab Rebellion”,  using the same name that the Arabs in Syria called their rebellion against France in 1919. The political parties in Palestine used names like “The national Block”, “The Reforms”, “Independence” or “The Arab Palestinian Party”. In the Palestinian society there was confusion whether they are a different nation seeking their independence or just a part of a large Arab Nation looking for one united Arab State in the Middle East.

After the Khomeini Revolution in Iran in 1979 a new era of Pan Islamic ideology swept the Middle East. The new political powers in the Middle East began to use religious motives to define themselves: Hizbullah – Party of God, Jamaa Islamiya –Islamic Society and Islamic Jihad. In all the Middle East, as well as the Palestinian  Authority, the Islamic identity overshadows any other national or social identity.

Indeed new political groups that immerged in the Palestinian Society, in the 80ies and later, disregarded their Palestinian identity and referred only to their Islamic aspirations:  the Islamic Resistance Movement – Hamas, the Islamic Jihad, and lately in Gaza “the Islamic Army”

The Palestinians called their first uprising against Israel, in 1987, the “Stones’ Intifada” describing that Intifada as fought by stones for national liberation. The second uprising, in 2000, was already the “Al-Aqsa Intifada” ( Al-Aqsa Mosque in Jerusalem is the third holy place in Islam after Mecca and Medina in Saudi Arabia).  In the Palestinian  Authority even once secular organizations like the Fatah can no longer address the Palestinian public without Islamic terminology.