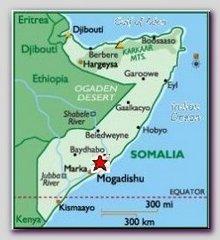 Up to 20 people were killed, on Thursday 01/21/2016 evening, when al-Shabab suicide bombers and gunmen attacked a seafront hotel and restaurant in the heart of the Somali capital. A car packed with explosives rammed into the Beach View Hotel on Lido Hotel & beach in Mogadishu, after which several al-Shabab fighters opened fire at the hotel.

At least six people – and eight attackers – were killed, the Somali intelligence agency told reporters. Other reports, citing police and officials, said up to 20 people may have been killed in total. Troops then besieged the attackers at the restaurant for eight hours.

Somali security forces have retaken control on the situation on Friday 01/22/2016 morning, about 12 hours after the attack began.

Hotels are the most likely targets for Islamic terror in the recent years aiming to reach media headlines and to cripple the local economy .
.
.