Published May 1, 2007
>
Ammonium nitrate is an agricultural fertilizer. If properly mixed with fuel, it is a powerful explosive ideal for car bombs because it is stable and can be easily obtained in large quantity.

In January 2004 British Police was tipped off by a commercial supplier of fertilizers in London that a group of youngsters, most of them from Pakistani descent, purchased, from October 2003, a large amount of ammonium nitrate. That information caused an international surveillance operation led by British security service MI5. 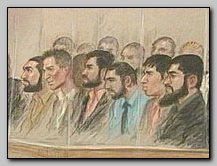 The first step in the operation was to replace, with the help of the commercial company, the fertilizer with a substitute so no damage will be done. The surveillance unraveled that a group of 8 Muslims, all but one from Pakistani descend, led by Omar Khyam, age 23, from Crawley, West Sussex, stored about 600 kg of ammonium nitrate in a in a self-storage locker in Hanwell, West London near  Gatwick airport.

The group had links to Mohammed J. Babar , 32, an American citizen that stayed in Pakistan in early 2003 and to Mohammed Momin Khawaja, 32, in Ottawa, Canada. Those connections, all over the world, made the investigation an international operation. During the surveillance the officers observed several times Mohammad Sidique Khan, later the ring leader of the London 7/7 attack, and Shehzad Tanweer, associated with the suspects and mainly with Omar Khyam but in such a context that did not arise special suspicions in MI5 at that time.

In early 03/2004 Mohammed J. Babar  was arrested in USA when he returned from Pakistan. His arrest was kept, at first, in secret. Mohammed J. Babar cooperated with the investigation and revealed that the U.K cell targeted in Britain the Bluewater shopping centre in Kent, Gatwick airport near London and electricity installations. The investigation in USA led to the arrest of Mohammed Momin Khawaja in Ottawa, Canada on 03/29/2004.

That development put in risk the investigation in UK. On the night of 03/30/2004 700 police officers raided the apartments and properties of all the suspects. The police arrested the leader of the group Omar Khyam , his brother Shujah Mahmood, 19, Jawad Akbar, 23, from Crawley, West Sussex, Waheed Mahmood, 35,  also from Crawley, West Sussex,  Anthony Garcia, 25, of Barkingside, East London (also known as Rahman Adam) and  Salahuddin Amin, 32, of Luton, Bedfordshire and Nabeel Hussain from Horley, Surrey.

Their trial on charges to attempt to carry out terror attack was opened in London on 03/21/2006. In the trial the testimonies of Mohammed J. Babar in USA and Mohammed Momin Khawaja were presented by the prosecution to prove the case. A tape recorded by MI5 during the surveillance was presented where  Omar Khyam was speaking about killing all the  “Toms, Dicks and Harries” in the possible target the “Ministry of Sound”  night club in London.

The final straw for Omar Khyam was seeing the UK support of the 2003 invasion to Iraq to topple the dictator Saddam Hussein.

On Monday 04/30/2007 the court in London acquitted Shujah Mahmood and Nabeel Hussain from all charges, convicted the other five defendants and sentenced them to life imprisonment.

UK must get ready to the real possibility that after the war in Iraq will be over, or even before, the priority of Islamic militants all over the world will be to take British citizens hostage in order to release the hundreds of Islamic activists that are held in jail in UK.

These activists accused for attempts to carry out terror attacks in UK are considered by Muslims as idealists who risked there life and freedom for the Islamic insurgency in Iraq. Tourist resorts, embassies or British journalists all over the world are obvious targets.

* Sky news broadcasted, on Tuesday 02/23/2010, a homemade video footage, shown to the jury during the trial, of the cell members train themselves in a Jihadi stile in Blackburn Park, Lancashire UK.