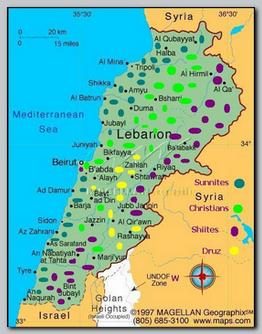 LEBANON is on the Mediterranean coast of the Middle East that has a population of about 3.5 millions people (05/2007) and stretches on 10,452 km.

LEBANON was actually created by France in 1922, after World War I, with accordance to French interests at that time. Ethnic and religious rival groups like Christian and Druz were forced to share one political identity – LEBANON. Therefore feelings of national identity in LEBANON are not clear-cut and national affiliation to Syria was always, in all communities, a basic factor in Lebanese politics alongside religious and sectarian identity.

LEBANON is an independent country since 1943.   According to the pact of 1934 and Taef’ agreement of 1989 LEBANON manages itself in fragile and delicate balance between the different communities in LEBANON. This balance is going down to the lowest ranks of the Lebanese civil service and army. For example even low ranking army officers are appointed according to a specific, carefully guarded, key following their communal identity.

In Lebanese political system the main sectarian communities: Christians, Sunnites and Shiites have an option to Veto any government resolution while the smaller Druz community has almost the same power. Therefore the political system brings upon LEBANON permanently weak governments, political vacuum and standstill.

The constitutional by-communities balance is distorting the true political power of LEBANON. For example – the Shiites who are, demographically the majority  of over 50% and the biggest community have only 20 parliament members ( 16% out of 124 members) and therefore, on a permanent basis, they do not get their proportional part of national resources and do not have the proportional representation in state and public institutions.

This political infrastructure, democratic so to speak, but sectarian in practice, makes the work of the government effective only with a full consensus, which is rare. Management of everyday life is, therefore, possible only in sectarian – communal framework and partial sovereignty of state within a state. Traditionally the Lebanese government was mainly a representative body for international purposes rather then an executive force for internal management.

In such political culture it is but certain that each community protects its’ interests in LEBANON guarding its’ partial independence, also by having a militia. So is the case in LEBANON since its’ establishment. So far, LEBANON never implied its’ sovereignty fully over all of its’ territory and domains.

The gap between declared government policy and independent sectarian policies, alongside the weakness and paralysis of the central government, dragged the country time after time to civil war and foreign armed intervention. This happened when USA intervened with marine forces in 1958 in order to stabilize the government of Kammil Shamun against the Sunnite opposition. This was the case in 1976 when Syrian army attempted to support Christians with Suleiman Frangieh against a coalition of Druz, Sunnite and Palestinian opposition. So Israel interfered in 1982 against the Palestinian stronghold in LEBANON.

Characteristic to all those events and to political history of LEBANON is that foreign intervention, including lately Irani involvement along the Hizbullah, has its’ own interests which have nothing in common with benefits for the people or government of LEBANON. The Lebanese army, as representative of Lebanese sovereignty, remained passive without serving as a tool to form internal stability. Lebanese fate was and is formed by external forces.