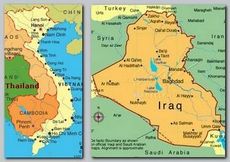 The war in Iraq is not a duplicate of Vietnam War but there are some similarities. The main similarity is the no-win situation that USA put itself in.

Just four month after the first security plan for Iraq, issued by the new commander of the USA-led coalition force in Iraq – General David Petraeus, in 02/2007, a new major security offensive was launched yesterday 06/16/2007 around Baghdad.

According to the new plan troops will enter “key areas” around the Iraqi capital Baghdad, used by insurgents to launch car bombings. The USA led forces will now search in the hundreds of small villages around Baghdad and the thousands isolated farm houses in the erea in order to “search and destroy” insurgence’s infrastructure around Baghdad. The USA army will kill the mosquitoes one by one but the swamp will remain.

As in Vietnam, 40 years ago, a new security plan is issued every few months to cope with the situation aimed at bringing Iraq (Vietnam) under control. No matter how successful the military campaign was, and they generally were successful, the enemy evaded confrontation, shifted his activity to other areas or suspended it temporarily. A few weeks later the enemy adapted himself to the new situation, used new tactics and the situation returned to square one again. It is reasonable to assume that this will be the course of events also this time.

As in Vietnam, as long as the war is going on, the local civilian society is crumbled and so the local Police and Army. At the end, the huge amount of money pumped to the veins of the Vietnamese Army was in vain – such is the case with the Iraqi Army today.

The main problem is not Iraq but Iran and USA has, in fact, only three options: to cut a comprehensive political deal with Iran, to fight Iran or to leave the problem of Iraq unsolved and return home.