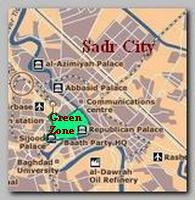 As the truce in Syria, from Friday 02/26/2016 midnight, is limiting military operations in Syria the Islamic State shifts its focus to the Iraqi Front, more specifically to the capital Baghdad.  Scores of people have died, on Sunday 02/28/2016, in attacks across Iraq as fighting rages between pro-government forces and ISIS.

In Sunday’s latest attack, a twin suicide attack hit the predominantly Shia neighbourhood of Sadr City, just Northeast  of the Iraqi capital Baghdad. At least 70 people were killed in the blast, caused by the two suicide bombers.  ISIS said  its militants had carried out the attacks and more would follow.

In Abu Ghraib, west of Baghdad, a suicide bomber and gunmen launched an attack. A number of policemen and tribal fighters  were kidnapped. A nearby village was also raided by the group in addition to as a silo and a water plant in the town, military sources said adding that both areas are now under I.S.I.S control.

In yet another incident, 18 policemen were killed in an ISIS assault on a military barrack near Fallujah in the western Anbar province. The attack happened close to water-distribution plants in the town of Amiriyat al-Fallujah. Military sources said a number of policemen were also killed southeast of Fallujah in an ISIS suicide car bombing.

However, Baghdad’s operations command centre denied that any of its forces were taken prisoner, saying two suicide attackers were killed during a foiled assault.

** On Monday 02/29/2016 morning at least 40 people were killed by an explosion at a funeral attended by Shia militia commanders in the eastern town of Muqdadiya, while a blast at a security checkpoint in Baghdad left eight security personnel dead. Later the same day in late night. almost about midnight 4 Islamic State militants wearing army uniforms blew themselves up after gaining entry to a base near Haditha, killing Brig, Gen’ Ali Aboud and 9 of his soldiers.