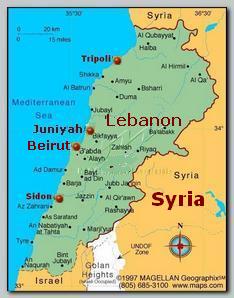 In the last Lebanese elections, which ended in 06/2005, the anti SYRIAN block, called the “March 14 Coalition”, gained 67 seats while the pro SYRIAN opposition only 61 seats. The main political issue that divided the Lebanese society was about the investigation and the authorization by U.N of an international court to judge Rafik Hariris’ assassin suspects. This was approved on Wednesday, 05/30/2007, by UN Security Council (see – UN-STL). This trial, if it will open, can lead the responsibility for the murder straight to the presidential palace in Damascus, Syria.

The new PM Fuad Senoira did a remarkable job in overcoming and containing many political obstacles put in front of his government by Syria and the pro SYRIAN opposition led by Hizbullah: war with Israel, provoked by Hizbullah in summer 2006; armed clashes with “Fatah al-Islam” in the Palestinian refugee camp Nahr al-Bared, close to the Northern city of Tripoli in the last spring; an ongoing terror campaigne to undermine the political stability and a series of political assassinations aimed against the “March 14 Coalition”  members in the Lebanese Parliament. In the wider context Iran, in full cooperation with Syria, is determined to cause a failure to any ally of USA and any pro American policy in the Middle East.

In Lebanon political assassinations, alongside bribery, were always very effective in changing the course of the local politics. Two more successful assassinations and a suitable amount of money to bribe one or two parliament members are enough to change the course of the current Fuad Seniora s’ government and to put in power a new pro SYRIAN government that will be, probably, legal.

In 09/25/2007 the Lebanese parliament is scheduled to elect a new president for the next 6 years and the pro SYRIAN president ÉEmile Lahoud is supposed to be replaced. The main problem is that the “March 14 Coalition” can not rely on its narrow majority in the violent atmosphere of Lebanon.

In order to strengthen his shaky coalition, prior to the presidential election, PM Fuad Senoira calls for new early elections in 08/05/2007. This is a risky gamble as it is not really clear if the “March 14 Coalition” has the majority in Lebanese peoples mind.

Anyway, Lebanon plunges to a political turmoil and to a turning point where Syria and Iran are determined to use extreme measures to ensure a pro SYRIAN majority in the parliament, a pro SYRIAN president, suspension of international court to judge Rafik Hariris’ assassin suspects and to subdue completely the pro Western political wing in the Lebanese policy.

Bashar Assad, Syria’s president, said several times that the nomination of an international court for Rafik Hariris’ case can lead to a major crisis in the area.  Syria already ordered all its citizens to leave Lebanon up to 07/15/2007. The current President, ÉEmile Lahoud, said that he intends to take “surprising” steps in the next future. With Israel, USA and Iran in the background Lebanon is moving fast to a turning point, and as it is so often in the Middle East – things can go out of control in no time.