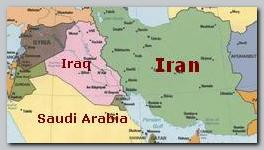 * Abu Omar al-Baghdadi, who leads the “Islamic State in Iraq” (an early configuration of I.S.I.S ), a Sunnite Al Qaeda umbrella group, threatened on Monday 07/09/2007, in a 50-minute audiotape broadcasted on the web, to wage war against Iran unless it stops supporting Shiites in Iraq within two months. “We are giving the Persians, and especially the rulers of Iran, a two month period to end all kinds of support for the Iraqi Shiite government and to stop direct and indirect intervention … otherwise a severe war is waiting for you …we advise and warn every Sunni businessman inside Iran or in Arab countries, especially in the Gulf, not to take partnership with any Shiite Iranian businessman” – Abu Omar al-Baghdadi said.

Iran, Al Qaeda and the Global Jihad have a common enemy – the Western Democracies. In the early stages of Al Qaeda, activists of the organization used Iran as their favor transit country in order to cover up their trail to Afghanistan. In operation “Absolute Justice” in Afghanistan, in 11/2001, many senior Al Qaeda operatives fled to Iran including the son of Osama Bin Laden – Saad Bin Laden.

In the last three years the public debate in the Arab media, especially in the Sunnite countries like Saudi Arabia, Egypt and Jordan, began to use the same rhetoric against Iran they used, generally, against Israel. Some even refer to Iran as a much greater danger then Israel.

Prior to the Iraqi war king Abdullah of Jordan tried to warn President Bush. His opinion was that overthrowing of Saddam Hussein’s regime and installing a sort of democratic government in Iraq would bring upon yet another Shiite state with major Irani influence and installing a Shiite axis from Iran to Lebanon. The axis will thrive under the shadow of Irani nuclear capabilities in progress, ruling over endless energy sources and a main factor of threat in the Middle East. In king Abdullah’s view not a democratic dawn will set on the Middle East but a long term crisis.

For some time Saudi Arabia is financing and arming Sunnite groups in Iraq and warns USA that Saudi Arabia might intervene directly in Iraq if USA will suddenly withdraw its troops from Iraq.

** It still remains to see what impact the Shiite – Sunnite rivalry will have on the Islamic Global Jihad.