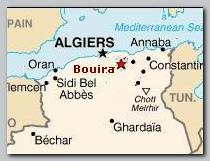 9 soldiers were killed in Algeria on 07/11/2007 morning, near the town of Bouira, 120 km South-East to the capital Algeria, when a suicide car bomb exploded on a check point outside the town, close to military barracks.

Algeria is hosting the All-Africa Games. The opening ceremony was due to take place on the evening of the 07/11/2007, with more than 8000 participants.

“MAGHREB Al-Qaeda” – AQIM -took responsibility on the attack. “Our martyr was able to enter into the heart of the (barracks) and set off the explosion there,” said a spokesman of al Qaeda Organization in the Islamic Maghreb in an audio tape.