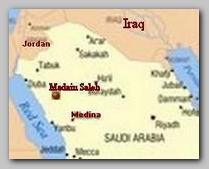 In the evening of Monday 02/26/2007 a group of French tourists, some of them Muslims, were attacked by machine gun fire in a known tourist site, the ruins of Madain Saleh, in north-western Saudi Arabia. Three French citizens were killed from the shooting and four others, including a child, were seriously wounded.

The Saudi Arabian Police refer to the incident as a Muslim terror attack and assumed that two gunmen took part in the event.

In the morning of Friday 04/06/2007 the Saudi Police closed in on an apartment in the Holy City of Medina in order to arrest a suspect in this murder. In the exchange of fire which erupted, the prime suspect, identified as Waleed Bin Mutliq al-Radadi, one of the most wanted Islamist militants in Saudi Arabia was killled. The Saudi police is still looking for two other fugitive terrorists .
.
* Related topics –
.
MORE IN  SAUDI ARABIA
SAUDIA  2006
SAUDI ARABIA  2005
*****************************
read more
Please Share...