* Mohamed  Abrini of Moroccan descent , from Molenbeek suburb of Brussels, was born in 1984 and is a Belgian national .

In 07/2015 Mohamed Abrini visited the UK and took pictures of a football stadium in Bermingham. He and Abdelhamid Abaaoud are suspected of plotting to send 60 battle-hardened IS fighters from Syria to launch attacks in Germany, France, Belgium and Britain.  According to the BBC Mohammed Abrini was in Birmingham, UK. in 07/2015. Mohammed Ali Ahmed & Zakaria Boufassil, allegedly met Mohamed Abrini at Small Heath Park in Birmingham and gave him £3,000.

Mohamed Abrini  was recorded by a surveillance video camera with  Salah Abdesalam two days before the Paris Carnage — at around 7 p.m. on 11/11/2015 — at a gas station in Ressons-sur-Matz, France, on the highway to Paris. 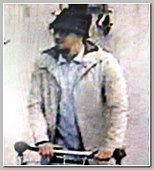 Mohamed Abrini was also identified as one of the suicide bombers in Brussels’ Zaventem Airport on 03/22/2016 who failed to activate his suicide explosive belt . The fate of Mohamed Abrini  is yet unclear but the Belgian prosecution issued and international arrest warrant over him.  He is now considered one of the three most wanted terrorists in Europe .

** After distributing a video footage of ”the man with the hat’. the third repent suicide bomber in Zaventem Airport. the Belgian police identified him as the Paris attacks fugitive Mohamed Abrini and managed to arrest him along with Osama Krayem , on 04/08/2016. He admitted the next day in his initial interrogation to be. Indeed, the third attackers who fled the scene leaving behind his suicide belt .