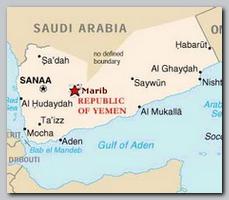 An archeological site in central Yemen was a subject to a suicide car bomb attack on Monday, 07/02/2007. Six Spanish tourists and at least one Yemeni died in the blast, at an ancient temple complex in Marib, central Yemen.-

Al Qaeda supporters are very influential among the mountain tribes of Yemen. Yemen has although a long lasting conflict with the Shiite minority tribes in the North which are about 45% of the population in the country. Tha attack was carried out just 5 months after the Marib Foiled Attack.
———————

On 07/08/2007 the Yemen authority reported that one of the main suspects in committing the attack, an Egyptian citizen, Ahmed Basyouni, who was allegedly a member of Al Qaeda, was killed in an exchange of fire when the Yemen police close in on Friday, 07/06/2007, on his hideout. He refused to surrender and shot dead by the police. Another 15 suspects were arrested in the past last days in connection with the Marib suicide attack.

On 08/06/2007 morning Yemen forces raided a safe house near Marib and in the exchange of fire killed four Islamic militants suspected of planning and facilitating the Marib suicide attack.

Among the terrorists killed in the raid was also the Kuwaiti citizen Hamza Salim al-Kuwaiti (from Kuwait). On 02/03/2006 Hamza Salim al-Kuwaiti, with other 22 Islamic militants, among them Jaber Elbaneh, Jamal al-Badawi, Nasser al-Wehaishi and Qassim al-Raimi escaped the Yemeni Jail (Sanaa Escape) in a daring operation. Kassem al-Raimi is considered to be the mastermind of the Marib suicide attack.
The other men killed were named as Ali Jardan, Ali Doha and Omar al-Wailee. The Yemen police is still looking for five more suspects in the attack, among them Nasser al-Wehaishi and Kassem al-Raimi  .
.
A day after the killing of Hamza Salim al-Kuwaiti, on 08/07/2007, militants armed with machineguns and rocket-propelled grenades attacked Yemeni government targets in the Marib region and an electricity sub-station in the area.
** A court in the capital Sanaa sentenced, on Monday 07/13/2009, 6 Yemeni citizens to death and 10 other defendants to jail terms ranging from eight to 15 years for committing the attack as well as other terror attacks. See – Sanaa 07.13.09
** One of the suspects of planning the attack, Saleh Mohammed Ali al-Kazemi, was killed by a USA airstrike in Abyan province, on 12/17/2009 (see – Abyan 12.17.09).