THE AMERICAN FORCES OFFENSIVE AGAINST ISIS 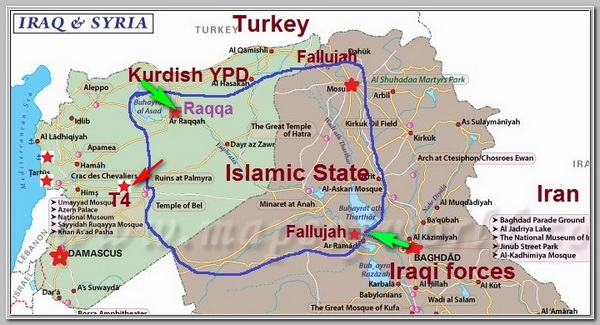 In the Southern flank of the US led offensive against the Islamic State the Iraqi military is closing in on the city of Falluja, which has been held for two years by the Islamic State group, several Arab media outlets said on Tuesday 05/24/2016.  Iraqi forces have the backing of airstrikes by the US led coalition.

Meanwhile, Iraqi Defense Ministry published an official report which includes statements confirming that the Iraqi Shiite  Hezbollah Brigades, an Iranian proxy,  are involved too in the battle of Fallujah.

From its part, days ago, Harakat al Nujaba, or Movement of the Noble, an Iranian-supported Shiite militia which operates in both Iraq and Syria, has said it is clearing a road in eastern Anbar province in preparation for an upcoming offensive to retake Fallujah from the ISIS. The Iranian Revolutionary Guard  General Qassem Soleimani, the head of the El-Quds Force – the external operations wing – was spotted in a picture said to be taken near Falluja in the “Fallujah operations room” was posted to the Facebook account of Harakat al Nujaba alongside The militia’s leader, Akram al Kaabi, who is a US-designated terrorist, and Abu Mahdi al Muhandis, another US-designated terrorist

Hashid Shaabi,an umbrella structure of Shiite militias controlled by Iran,   will take part in encircling Falluja but will not enter the city unless the Iraqi army fails in doing so, said Hadi al-Amiri, the leader of the Badr Organisation, the largest component of the Shiite coalition.

Although some Sunni tribes are taking part in the attack the Fallujah offensive is. no doubt, a mainly Shiite operation, supervised by Iran and back by American airstrikes with Shia militias playing a major role in the campaign.

— In the eyes of the Arab Sunni countries, the Gulf Emirates and Saudi Arabia, especially after the American-Iranian nuclear deal, the current battle of Falluja is like to stick in an American finger in their eye.  They consider ISIS as a major threat to their regimes but an Iranian- American military cooperation against Sunnis an existential religious threat and it is almost certain that the Sunni countries will find a way to support ISIS because it is fighting Shiites and even more so – Iran.

Almost simultaneously, two days after Gen. Joseph Votel, commanding general of U.S. Central Command, completed a secret several-hour-long trip to northern Syria to visit, on Sunday 05/22/2016,  several locations where there are U.S. special operations forces and meet with local forces, the U.S. is helping train to fight ISIS. in the Northern Flank, Syrian Kurdish forces from Northern Syria, backed by 500 USA Marines as advisers, trainers and intelligence providers on the ground, American airpower from above and helped by Syrian ‘secular’ Democratic militia, began their push toward ISIS Capital Raqqa, on the upper Euphrates.

–Like Saudi Arabia Turkey  is threatened by ISIS but the prospect of Kurdish forces, organized and trained by USA, who proved themselves times and again as an efficient military force and already declared their territory as a would be independent State, is a nightmare. It is almost certain that Turkey will do its utmost’ including supplying ISIS with more advanced and sophisticated weapon, to defeat the Kurdish forces or, at least, to stop them .

Recently ISIS, under Russian and American military pressure, escalated and upgraded its attacks on Syrian regime’s strongholds and bases. 7 car bombs, on Monday 05/23/2016, killed over 150 in the heart of the the Alawite enclave near Russian bases in Tartous and Jableh and the next day a commando raid on T4 Airbase, just about 60 k”m West to Palmyra, caused immense damage and destroyed 4 Russian helicopter gunships .

It turns out that the main current problem of the Middle East are: A.–  The Sunni-Shia confrontation; B. – The deep sectarian and national historic rivalries and C. -The deep turn in USA regional politic from supporting the Sunni states in exchange of oil to growing cooperation with the Shiites and Iran, including with officially designated terrorists, against Sunni controlled territories.

Summary – Even if the campaign against ISIS will succeed the wars in the Middle East are gearing up to a new form of religious war between Sunnis & Shiites and a regional comprehensive deal still out of sight and beyond the horizon .
.
.
Related to[ics ;
–
05/2016-13 IRANIAN ELITE REVOLUTIONARY GUARD KILLED NEAR ALEPPO
02/2016-WAS THE BATTLE OF RAMADI A SUCCESS OR ?
12/2015-THE KURDISH THIRD INTIFADA (UPRISING)
08/2015 -IRAQ’S PARTITION “MIGHT BE THE ONLY WAY”
03/2016-THE CONFUSION OVER THE BATTLE OF TIKRIT