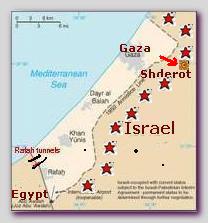 Since the complete Israeli withdrawal from Gaza strip in 08/2005, over a thousand of Kassam rockets and mortar shells were fired toward the Israeli towns and villages on the border with Gaza, especially on Shderot.

At first Israel adopted a policy of “wait and see” as the perception was that the Palestinian anarchy, the rivalry between the different factions and the desire to display the Israeli withdrawal as a military defeat were stimulating the daily shelling.

Only after more then 400 Kassam shells which affected the ordinary life of more then 100.000 Israeli citizens, Israel began to respond by shelling back or by target killings of the Kassam operators. The measures proved to be ineffective.

The threat from Gaza continued to disrupt Israeli life and increased with time. On 06/29/2006 a group from Gaza, led by the Army of Islam, kidnapped the Israeli soldier Gilad Shalit from the Israeli side of the Gaza border. The Israeli response, although caused the death of hundreds of Palestinian militants in Gaza, put Israel under international pressure as causing humanitarian disaster in Gaza and, eventually, shifted the focus of the international community from the growing Islamic militancy threat in Gaza to the humanitarian crisis there. The Hamas, partially and deliberately, provoked this humanitarian crisis in order to tie the hands of Israel and to increase the international pressure on the Jewish state.

On 06/15/2007 the Hamas, committed to the destruction of Israel, took over all Gaza Strip and continued with the shelling of Israeli citizens. In a bizarre and almost impossible contradiction, despite the shelling, Israel continued the supply of basic humanitarian aid, food, water and electricity and at the same time continued with limited military response to the daily shelling fired from Gaza.

In the last weeks there is an escalation in Gaza. Armed squads are trying, almost daily, to cross the border from Gaza to Israel and carry out attacks against civilians. The Palestinian armed squads, from various organizations, dig tunnels, use explosives or ladders to cross the heavily guarded border. Last Saturday 08/25/2007, such a squad penetrated 1.5 km inside Israel before the squad was intercepted and killed by the IDF only after they opened fire on Israeli force. Israeli army is completely aware that its defensive approach is ineffective against the Kassam shelling and very limited in preventing, in the long run, the accumulation of experience, sophisticated weapons and self confidence in the Hamas.  Hamas self confidence also leans on the rutine international interference whenever Israeli incursion will become, with Hamas’s help, into a humanitarian crisis.

No matter how good are the Israeli soldiers or how sophisticated is the technology, eventually one of the Palestinian squads will succeed in penetrating an Israeli town or village and will result in the murder of Israeli civilians. Such an event, which is, eventually, inevitable, will leave Israel without a choice but to confront, directly, the Hamas in its strongholds, in the crowded streets of Gaza, just as the Lebanese army is confronting Fatah al-Islam in Nahr aL-Bared in North Lebanon.