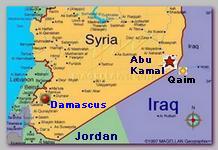 Secretary Of State John Kerry said, on Wednesday 06/29/2016, I.S.I.S had begun targeting airports as an act of despair in the face of defeat, hours after the attack that left up to 50 dead in Istanbul, Turkey. It is the same ISIS President Obama described, in 07/2014, shortly before the organisation seized Fallujah and Ramadi in Iraq,l  as a junior varsity basketball team (J.V team ), playing down the strategic threat posed by the I.S.IS, compared with Al Qaeda.

Acknowledging military setbacks, President Barack Obama, on 06/08/2015,  said USA still lacks a “complete strategy” for training Iraqi forces to fight ISIS. He urged Iraq’s government to allow more of the nation’s Sunnis to join the campaign against the Islamic State.

After spending over $500 millions to train a pro-American militia to intervene under the name “Brigade 30” the all project turned to be, in 09/2015, a total failure and a bizzare joke  ,

USA did not give up and a new project was launched, the New Syrian Army -NSA, trained, financed and equipped by the U.S and supervised by Jordanian officers. The first appearance of the new militia was  on 03/04/2016 as fighters of the militia seized Al-Tanf border crossing on the Syrian side of the Iraqi border, close to the triangle Jordan/Syrian/ Iraqi borders.

As John Kerry was talking about “despair”  NSA launched an attack on the Syrian border town with Iraq al-Bukamal, also known as Abu Kamal, in order to seize the nearby Hamdan airport,  to attack ISIS forces retreating from Fallujah and to establish a base of operation for further advance against ISIS. But the success was short living. The next day, Thursday 06/30/2016, ISIS carried out a counterattack causing a humiliating defeat to the USA, Jordan and the NSA. They fled the region leaving behind dozens of combat vehicles, piles of ammunition and over 45 fatalities, some of them where beheaded ISIS style, other executed and othe killed in the fighting. Once again US allied militias proved to be a wishful thinking and an  illusion, created by US’ money,

No wonder that an U.S. officials said on Thursday 08/30/2016, shortly after the al-Bukamal fiasco, that the Obama administration is considering a plan to coordinate air strikes on Jabhat al-Nusra and Islamic State militants in Syria if Syria’s government stops bombing moderate rebels.   The plan depends in part on whether Russia is willing to press Syrian President Bashar al-Assad, The subject was discussed between Secretary of State John Kerry and Russian Foreign Minister Sergey Lavrov .

** US-backed rebels, on Sunday 07/03/2016, accused al-Qaeda-linked fighters of storming their headquarters in northwestern Syria, kidnapping their commander Mohammad al-Ghabi and dozens !! of other combatants. According to similar events in the past Mohammad al-Ghabi will, most likely, join Jabhat al-Nusra with his men since the alternative is torture and execution .  It seems USA is in confusion and despair.

As for ISIS itself – it is a very fluid organisation who reinvented itself several times since 2004, its ideas and ideology is widespread all over the world, they recently put their focus on international terror and ISIS is today more dangerous and a bigger threat than ever before.

*** he recent Ramadan was the bloodiest in history with attacks from Orlando – USA, through Saudi – Arabia,  Istanbul, Dhaka ,  and the bloodiest attack in Iraq with about 250 killed in Baghdad alone – a grim indication to the strength, influence and the New Modus Operandi of ISIS all over the world .
.
.
Related topics:
–