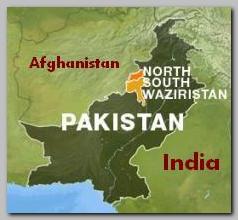 Since the Lal Mosque crisis of 07/2007 Pakistan is actually in a state of CIVIL WAR between the Pakistani military regime and the Taliban, especially in the North and the tribal era on the border with Afghanistan, known as Waziristan. The civil war is characterized with almost daily Suicide attacks, roadside bombs, ambushes, artillery and rockets shelling, raids and air sticks.

That civil war bears also the hallmark of an ethnic war as the Taliban is a Pashtu movement supported by the Pashtu population. The south of Pakistan and about half the population are Punjabis speaking Punjabi, the rest are speaking mainly Urdu and the Pashtu language has no official status in Pakistan, although the language is spoken by about 10 million people, 12% of the population of the country.

In the last days of 10/2007 fierce fighting is waged in North Waziristan which, according to Pakistani military spokesmen, claimed the life of more then 150 militants and about 50 soldiers. During the fighting the Pakistani Air Force bombed suspected pro-Taliban positions near the Afghan border and claimed to kill about 50 militants. Access for journalists to the tribal areas is restricted and it is impossible to verify how many were, indeed, killed and if they were really militants. The Pakistani aircraft targeted the village of Mir Ali and the surrounding area. There are many reports of a large number of civilians killed too in a local bazaar. (No worry – an UN commission to investigate the abuse of human rights and the ‘massacre’ of innocent civilians is not expected).

So far the performance of the Pakistani army is poor. The official number of army casulties, since the Lal Mosque crisis, is about to reach 1000. Unique to this civil war is the many hundreds captured soldiers who “went missing” during military operations in the era. Just recently another batch of more than 200 soldiers was captured, apparently without a fight.

Some of the captured soldiers were later shown by the Taliban in video footages posted in the web. Few dozens Pakistani army soldiers were executed but the fate of most of the missing soldiers is unknown.

The phenomenon of large number of Pakistani soldiers who “went missing”, very often without a fight, suggests that the army suffers from desertion and low moral. The common Pakistani drafted soldier is a devoted Muslim, generally with sympathy to the idea that he is fighting his fellow Muslims in behalf of the USA rather then fighting the true enemies of Pakistan and Islam.