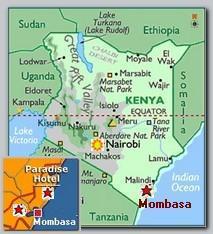 Mombasa is a harbor and a resort town on the INDIAN Ocean coast of Southern Kenya. The resort of Mombasa is favored by many Israelis and some of the hotels in Mombasa area are owned by Israelis. Charter flights from Israel to Mombasa are routine.

On the 11/28/2002 noon, while a group of Israelis just arrived to the lobby of “Paradise Mombasa” hotel in the town of Kikambala, just north of Mombasa, owned by an Israeli, a suicide bomber blew himself in the entrance of the Hotel. A second suicide bomber drove a car, at speed from the parking lot, loaded with gas canisters, containers of fuel and 200 kg fertilizer home made explosives and crashed into a wall in the hotel, exploded causing blaze and destruction.

Almost simultaneously another team, located at the end of the Mombasa International Airport runway, launched two Anti-aircraft shoulder-missiles from Russian manufacture SAM-7 “Sterla” toward an “Arkia” Israeli airliner carrying 261 passengers while taking off.  The launching was from too close a range so the missile could not domesticate on the plane and missed the aircraft. The Kenyan police found later the cases of the missiles on the spot.

16 people were killed, among them 3 Israelis, and about 80 more were wounded in the attack.

The arrest and interrogation of Omar Said Omar revealed the lineup of the Mombasa  Paradise Attack and the clear affiliation to Al Qaeda network in East Africa.

On 11/20/2002 two activists from “Itihad al-Islamiya” (Islamic Union) led by Sheikh Dahir Aweys, an Islamic organization affiliated to Al-Qaeda, Abdul Malik, and Issa Osman Issa, smuggled the border from Somalia to Kenya in a small boat, bought by Omar  Said Omar. They left from a fishing village along the eastern coast of Somalia, between Kismoayo port and Ras Kaambooni, near the Kenya border. In Mombasa they were joined by Saleh Ali Nabhan, a local resident of Mombasa area. The group was equipped with 2 SAM-7 “Sterla” missiles and located itself near Mombasa International Airport. After the Mombasa  Paradise attack Abdul  Malik and Issa  Osman Issa fled back to Somalia the same way. On the day of the Mombasa  Paradise Attack, on 11/28/2002, Abdul  Malik served as the escape driver while Saleh  Ali Nabhan and Issa  Osman  Issa where the missiles launchers.

Meanwhile the car bomb was assembled in Mohammed Kubwa Mohammeds’ farmhouse, on the outskirts of Mombasa, under the supervision of Fazul Abdullah Mohammed, who visited the group just two days before the attack on 11/26/2002.  The car used in the attack belonged to Saleh  Ali Nabhan. The technical support group was charged on 06/23/2003 in the Mombasa Trial for assisting the Attack. All were acquitted in the in summer 2005 from all charges.

Fumo Mohamed Fumo and Harun Abdisheikh Bamusa, armed with a Kalashnikov assault rifle and a Tokarev pistol, drove the car bomb on 11/28/2002 and carried out the Mombasa  Paradise suicide attack. Harun Abdisheikh Bamusa was suspected to be involved in the 08/07/1998 attack and was already wanted by the Kenyan authority ever since. They were briefed prior to the attack personally by Fazul  Abdullah Mohammed.

A previously unknown Palestinian group called the “Army of Palestine” claimed responsibility on the attack although the attack was carried out by Al-Qaeda branch in East Africa led by Fazul Abdullah Mohammed and was directly coordinated by Saleh Ali Nabhan, another senior Al Qaeda operative in East Africa.

Hassan Omar Hussein  – An Al Qaeda suspect from Yemen was arrested trying to get into Kenya in 09/2002. He was said to be planning to use a false Kenyan identity. A Kenyan, Mubarak Salim Mubarak, was accused of helping him and was released on bail. This shows an active and recent interest by Al Qaeda in Kenya. It used similar undercover methods before it attacked the US embassy on 08/07/1998.

* The Mombasa  Paradise attack was the first and so far (10/2007) the only direct attack of Al-Qaeda on a downright Israeli target.

* The Mombasa  Paradise attack was carried out by the same Al Qaeda net that committed the 08/07/1998 attack on USA embassies in Kenya and Tanzania. They targeted Israelis in the Peak of the second Palestinian uprising the – “Al-Quds Intifada”- probably to support the Palestinians.

* The attack was one of the most sophisticated terror attacks ever carried out but the implementation of the Mombasa  Paradise attack was hasty and sloppy.