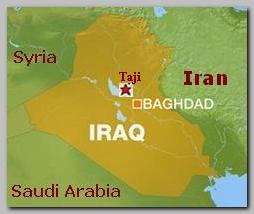 On Thursday.11/15/2007 noon, forces from the US-led coalition “observed several armed men in the target area near Taji, 25 km North West of Baghdad, and, perceiving hostile intent”, called in airstrikes. Ground fighting ensued, followed by more airstrikes, on other nearby locations.  Several large arms caches were found, including anti-aircraft weapons, US officials said. About 20 prisoners were taken and no coalition casualties were reported.

According to USA Army statement the coalition troops had been in the area on an operation targeting senior Al Qaeda leaders in central Iraq. US hurried to announce that 24 Al-Qaeda fighters were killed in the operation in Taji region.

Soon after US announcement Sheikh Jassem, the leader of the “Taji Awakening Council”, claimed that there were not 25 but 45 casualties and they were not Al-Qaeda but his militia fighting against Al-Qaeda alongside US. He added that the weapons  US troops found belonged to the Islamic Army, a Sunni group which has recently joined forces with the Americans.

The “Taji Awakening Council” is one of more then dozen tribal Sunnite militias that switched sides, in the last year, from insurgency against US led coalition in Iraq to fighting Al-Qaeda as an ally of convenience to US.

An American military spokesman said the weapons found – including anti-aircraft guns, surface-to-surface missiles and roadside bomb-making components – are not the type of weapons pro-US Iraqi militias, like those of the awakening ouncils usually have. But most of the so called “Awakening Councils” in Iraq were recently a part of the insurgence against US and stockpiled weapons mainly smuggled from Iran.

* There is no way to distinguish Taliban or Al-Qaeda from the local tribesmen. They all carry weapons, the same weapons, they all speak the same language, are dressed the same and behave the same. Indeed, in many cases the seemingly US allies are, at the same time, also Al-Qaeda or Taliban supporters.

* US is always claiming bombing Al-Qaeda in Iraq or Taliban in Afghanistan. In fact in many cases US has no concrete information who were really killed by its bombardment. In hundreds of cases it turned out to be innocent civilians, ally tribesmen, a provocation of locals to manipulate USA against rival clans or a misjudgment and a mistake in identification of US forces operating on the ground, such as the recent Taji case.

* In Iraq the situation is much more complicated because many militias that were just three months ago classified as Al Qaeda are, suddenly, US friends and allies.

* In most cases in Iraq it is not clear who is killing who and whay.