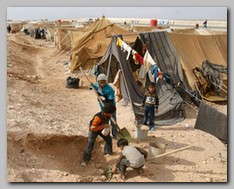 SOMALIA – On 11/13/2007 the U.N. refugee agency UNHCR said some 173,000 residents have fled their homes in the last two weeks alone. According to the report nearly half-a-million civilians have been forced out of the city since 02/2007 rounds of violence and described the humanitarian crisis in Somalia as “the worst in Africa”, including Darfur.

The Ethiopian forces, backed by USA, that control Somalia since the Ethiopian-Somali War, are fighting the councils of Islamic courts (CIC) in Somalia in African methods which means revenge killings, indiscriminate shelling of neighborhoods and preventing food and water supply to those tribes who, allegedly,  support (CIC).

AFGHANISTAN – On 10/29/2007 the Special Representative of the UN Secretary-General in Afghanistan, Tom Koenigs, and the head of World Food Programme (WFP) mission have warned of humanitarian crises in some parts of the country if food is not delivered before winter. According to their report about 400,000 vulnerable people are in urgent need of food assistance before winter starts and snow blocks routes in the mountainous regions of central-west.  The Afghan humanitarian crisis is the worst in Central Asia.

IRAQ – According to UNHCR there are 1.9 million internally displaced people in the country as a result of ethnic cleansing and 2 million refugees escaped to neighboring countries, especially Syria and Jordan. More then 100,000 were killed in all kinds of random indiscriminate killing and mass executions (some agencies estimates the number of people perished in Iraq, since the USA led invasion in 03/2003,  from violence, lack of medical basic care and growing-up crimes as high as 600,000 people). The Iraqi humanitarian crisis is the worst in the Arab World and in the Middle East.

There is a common denominator to the three humanitarian crisis:

* All three countries are suffering from decades of wars, abuses, total waste of human life and crumbling or nonfunctioning regimes. ( So was also the case of Iraq since the Gulf war of 1991 ).

* All three countries are Muslim countries but fellow extremely wealthy Muslim countries from the Gulf region disregard their moral Muslim obligations and decline to support or assist, in any way, their fellow Muslim brothers. They prefer to blame the Western Democracies, the USA and the Israeli-Palestinian conflict.

* Relatively to the humanitarian crisis in Iraq, Somalia and Afghanistan – Gaza Strip, by all means a poor place to live, can be considered a luxury.

* All three countries are subject to USA interference, directly or indirectly, in the context of the “War on Terror”. Although Iraq, Somalia and Afghanistan were horrible places to live before the USA interference – the humanitarian crisis in those countries deteriorated from bad to worse and it is, now, under USA responsibility and a moral burden to bare.