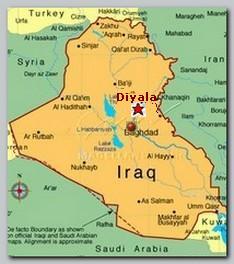 Just a year ago one of the benchmarks put in front of the Iraqi PM Nuri al Maliki’s government was the dismantling of the Militias in Iraq. There is a general understanding that without one political system, one law and one weapon obeying the law and serving the political system no country in the world can prevail but slip to anarchy.

The commander of the USA led coalition forces in Iraq, General David Petraeus’s security plan from 02/2007, contained a plan to negotiate with local tribes in the different districts of Iraq in order to mobilize them against Al Qaeda. Iraq was netted with dozens of tribes militias most of them with the name “Awakening  Council of….”. Although, at least now, these militias proved to be very efficient against Al Qaeda they also undermine, in the long run, any prospect of an efficiently governed Iraq.

In another development in Iraq, in Muqdadiya, 90km (55 miles) North-East of Baghdad, in Diyala province, US and Iraqi forces have discovered on 12/09/2007, a “torture complex” in an Al Qaeda safe haven.  According to the description of US military spokesman, the compound contains chains on the walls and ceilings, a metal bed connected to electric power and mass graves with 26 bodies. The spokesman suggested that the “torture complex” served militants displaced from their former strongholds in Anbar province and parts of Baghdad by the US troops and are believed to have migrated to Diyala province.

The stabile nature of the “torture complex”, which is not fit for the constant mobility of Al Qaeda groups in Iraq, suggests the contrary. The complex might have served, as well, also a local ‘Awakening  Council” harbored by USA.

Bush’s last year in power is characterized by sweeping under the carpet the most crucial problems of the Middle East – the Iranian nuclear technology and the war in Iraq, which will be left to the next administration, for the benefit of short term tranquility and an agenda of a supposedly “peace process”.  (See –  BUSHS LAST YEAR )