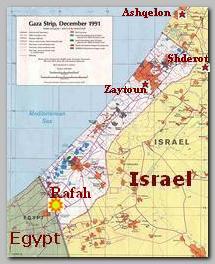 Rafah  crossing between Egypt and Gaza, in the Southern edge of Gaza Strip, is the only connection between Gaza and the Arab World. While the Hamas openly and publicly declared his commitment to the destruction of Israel and is facilitating the daily rocket shelling of Israeli villages Hamas, always, refers to the Egyptian as “Our brothers”. Hamas never shelled an Egyptian village and never declared its commitment to the destruction of Egypt. Despite that the world is expecting Israel to supply Gaza with fuels, to lift the siege and to take responsibility on the humanitarian situation in Gaza, very often staged as catastrophic by the Hamas (see also – Rafah 02.20.07 ).

Rafah crossing operated under an extension from 2005 of Oslo agreement from 1993 which authorized the Palestinian Authority to control the border crossing under the inspection of European observers. When Hamas took over Gaza strip in 07/2007 the Palestinian Authority apparatus was removed from the border crossing and replaced by Hamas security force, the “Tanphizya”, and the European inspectors fled back to Israel.

Since 07/2007 and the Hamas takeover on Gaza, it is the combined pressure on Egypt of the Palestinian Authority under President Mahmoud Abbas, the European Community, the Quartet, the USA and Israel, in order to weaken and de-legitimize the Hamas, in one hand, and to strength Mahmoud Abbas and the Fatah, in the other hand, to boycott the Hamas, to close the border crossing and not to enable any passage of goods and people in and out from Gaza. All the mentioned above are fully cooperating in besieging Gaza, they also fully cooperate in blaming Israel of the outcome of the siege.

Indeed actually Israel is not besieging Gaza and continues to supply Gaza with its basic needs.

The Hams is fully aware with the situation and sent, on 01/22/2008, thousands of women to protest and breach the Egyptian blockade in Rafah crossing. Egyptian police, eventually, responded with live ammunition which killed a woman and wounded 70 Palestinian women more. Few hours later Hamas engineers blow up large loopholes in the wall dividing Gaza strip from Egypt. It is almost certain that the Arab league will not convene to discus the brutal behavior of the Egyptian police nor the UN Security Council or any human right group.