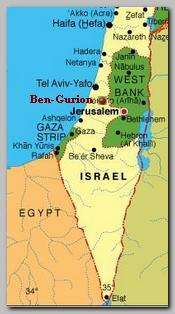 After the Hamas authority in Gaza toppled the border wall with Egypt in Rafah, on 01/23/2008, and hundreds of thousands Palestinians, about 700,000 people, flooded Sinai in order to buy basic needs and other goods, the border between Egypt and Gaza Strip was resealed on 02/03/2008. Both sides, the EGYPTIAN and the Hamas authorities, continue the negotiations about a basic arrangement to control and enable an ordinary traffic of people and goods through Rafah crossing.

Egypt is under pressure from the Islamic opposition in Egypt, from Saudi Arabia and Iran to reach such an agreement with the HAMAS. At the same time Egypt is also under counter pressure of USA, Israel and the European Union not to enable any recognition of HAMAS rule in Gaza and grant the HAMAS with the official status of negotiating as a sovereign with Egypt.

In the meantime the events in Rafah already created two new substantial threats on Israel and in some aspects on Egypt too.

According to Israeli intelligence sources few hundred HAMAS and PALESTINIAN Islamic Jihad operatives arrived to Sinai Peninsula, assimilated in the local Palestinian population in El-Arish or among the Bedouin tribesmen in the mountains of central Sinai. They are prepared to launch terror attacks against Israel through the 250 km common border between Israel and Egypt in Sinai. This border is not, yet, protected and controlled like the other borders of Israel and is a weak spot in the Israeli anti terror defense system.

In order to protect the border Israel must divert many troops even before any terror attacks might occurre. The long experience with Palestinian terror groups raises the risk that some of those activists will join local EGYPTIAN Islamists  in carrying out attacks against the tourist infrastructure in Sinai, especially if there are IsraeliS or Americans among the guests, similar to the Hilton Taba Attack from 10/07/2004 or the Sharm Al-Sheikh attack on 07/23/2005. Indeed the EGYPTIAN authority already arrested 15-Palestinians, organized in terror squads, on their way to commit terror attacks in Israel but also against tourist resorts in Sinai.

The second threat which emerged from the Rafah crossing events is the smuggling of large quantity of more sophisticated weapons to Gaza from Sinai alongside experts from Iran and Hizbullah in Lebanon. The new weapons include long range Katiusha rockets that can hit much deeper into Israel, anti tank missiles and, the most dangerous weapon, anti air missiles which can endanger not only Israeli army helicopter gunships operating in Gaza but, to some extent and under some conditions, also the commercial flights to Ben-Gurion airport, South-East of Tel Aviv. Indeed Israel already made some changes in the approach of international flights to Israel to ensure the safety of the civilian air traffic.

The Hamas managed, in the last weeks, to change dramatically the balance of power with Israel in its favor.