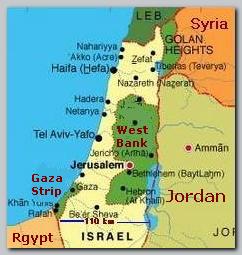 Israel is a very small country. Most of its population is living in the range 30 km from the Palestinian Authority territory. The Ben-Gurion airport is 6 km away from Palestinian populated areas so is the Israeli Parliament. A Gaza like situation in the West Bank is a recipe to a slow fading of Israel.

Since operation “Defensive Shield” in 04/2002 Israel is pursuing, daily, terror activists in the West Bank in order to prevent any recovery of terror infrastructure in the Palestinian territory. Each night terror activists are detained or killed, if they refuse to surrender, in an ongoing constant effort of Israel to contain the threat against its population in what seems to be a daily “grass mowing”.

Israel acknowledges that peace with the Palestinians and a two states solution, one for the Jewish people and the other for the Palestinian people, is the best solution. Hamas, clearly and openly said time and again, almost in every reference, that Palestine will be liberated fully only from the sea (Mediterranean) to the river (Jordan). That there is no room for an Israeli Jewish state on Palestinian historic land and the struggle will continue as long as Israel exists. The Hamas won a large majority among the Palestinians in the 01/2006 election and is, now, in full control on Gaza Strip. ( Two Palestines )

The current partner for peace talks with Israel is the Palestinian President Mahmoud Abbas. His legitimacy and popularity in the Palestinian society is doubtful and his relevancy in shaping the Palestinian society is even more dubious. Fatah security force is corrupted, not motivated and very often assists to terror himself. Fatah movement, through the military wing al-Aqsa Martyrs’ Brigades takes a fair share in committing terror against Israel in full cooperation with Hamas. All experts, IsraeliS, British and Americans, agree that without Israeli daily “grass mowing” the days of Mahmoud Abbas are numbered in the Palestinian leadership and so is the slim chance to any peace process. (See – Fatah Again )

The Hamas said, time and again, that he is ready for a cease fire with Israel in some conditions: A. Israel will stop all military activity in Gaza Strip. B. Israel will lift the economic siege on Gaza Strip and will allow transfer of goods and people through Rafah to Egypt. C. The cease fire will be comprehensive and will include the West Bank.

Israel can agree on the two first conditions since Israel is not seeking to intervene in the Palestinian life in Gaza if its villages around Gaza borders are safe. Israel can not accept, in any situation, the third condition – to include the West Bank in the arrangement which means, practically, free hand for the Hamas in the West bank. Israel can not let the Hamas to topple Mahmoud Abbas’s regime and, as a consequence, the only slim chance to some sort of political process. Israel can not accept a buildup of a Hamas infrastructure, with the same characteristic as in Gaza, just few km away from the densest populated areas in Israel and can not tolerate, in any circumstances, that each terror activist killed in Bethlehem will provoke rocket barrage on Shderot or Ashqelon on Gaza border.