Published March 22, 2008
The end of March 2008 marks the fifth anniversary to the war in Iraq and an opportunity to summarize the war. The initial official objectives of the war were:

A. – To force Iraq to reveal and hand over the projects of weapons of mass destruction with which Iraq threatened her neighbors.To stop the harboring of Islamic terror, allegedly committed by the Iraqi regime.

B. – To liberate Iraq from the harsh dictatorship of Saddam Hussein and transfer Iraq to a functioning democracy.

C. – There was also an undeclared objective to assume some sort of control on the Iraqi rich oilfields in order to decrease USA dependency on oil. 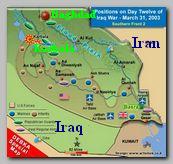 Although Saddam Hussein did his outmost to deceive the world about his technological capacities – the alleged Iraqi weapons of mass destruction project turned out to be an intelligence fiasco – there was no such a project.

Iraq never harbored Islamic terror, on the contrary, as a socialist secular regime any disclosure of Islamic radicalization was harshly and immediately oppressed. The war in Iraq became the breeding ground for new Islamic operatives for the next decade at least. Indeed most of the terror cells in Europe and USA in the recent five years were motivated by the war in Iraq.

The harsh dictatorship of Saddam Hussein was replaced by a non functioning chaotic regime, corrupted in unimaginable magnitude. In 2007 there is a clear shift in USA policy in Iraq from democratization toward practical functioning approach.

The price of oil went want ballistic high, to a level of more then $100 a barrel, undermining, substantially, the American economy. In the prospect of the initial objectives of the war in Iraq it is a total failure. USA is today much more dependent on foreign oil then 5 years ago.

In the first 4 years the USA army in Iraq dragged its feet in the mud. General David Petraeus’s security plan for Iraq, from 02/2007, reduced dramatically the level of violence in Iraq and managed to avoid a sectarian civil war in Iraq. The Security plan was based on a 25,000 surge of American troops into Iraq and forming about 130 Sunnite tribal Militias called “Awakening Council of…”. The Security plan is, no doubt, a military success. But handing over of weapons, military power and, subsequently, political power to groups loyal only to their Sheikhs contradicts the former policy of dismantling all Militias in Iraq and the perception of a sovereign state with one regime, one law and one authorized weapon. Iraq is today, after five years of war, a conglomerate of Militias. (See – IRAQ’S conglomerate )

The direct economical price of the war in Iraq is about $400 billions. The indirect expense is well over $1.5 trillion (Trillion =thousand billions). The huge expense has an impact on the current economical crisis in USA.

Almost 4,000 American soldiers died in Iraq. More then 25,000 wounded. The real price was paid by the Iraqi people. Over 130,000 were killed according to the minimal estimate. More then 1,000,000 wounded and more then 3,500,000 were displaced in a partial ethnic cleansing. The human catastrophe overshadows the worst years of Saddam Hussein regime. Most of the population has no regular electric supply and about half of the 22,000,000 Iraqi citizens have no streaming water.

The only bright side is that the Iraqi economy grew in 7% in 2007 and first minimal steps toward National reconciliation were made.

The only real winner of the war is Iran. Iran holds the key to a relative calm in Iraq and through the Shiite majority and the religious Shiite establishment in Iraq has much more influence on Iraq then the mighty USA. As a consequence of the War in Iraq the political legitimacy, determination and ability of USA to cope with the nuclear Iranian technology is severely undermined with horrible impact on the Middle East and the rest of the world.  The Middle East is, after 5 years of war in Iraq, un-stable as the region always was and even more.