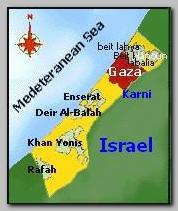 Gaza Strip stretches over 360 km and has a population of about 1.4 million (2008). Gaza is the densest place in the world and one of the poorest although in large parts of Africa, South American Andes, India, Bangladesh, Myanmar and other places in the world hundreds of millions are living in much worst conditions.

Although there were much more then hundred millions refugees in the world since the end of the Second World War, and there is in nowadays many millions refugees in Africa, the Balkans, Cyprus, Iraq and Afghanistan there is one UN agency – UNHCR to take care of  all the world refugees and another one – UNRWA designated uniquely for Palestinian refugees. UNRWA is supplying all Palestinian refugees in the Middle East with basic food materials and primary education.  Over 65% of Gaza population is determined as refugee descendants and their basic needs are supplied by UNRWA. UNRWA in Gaza employs 10,000 workers.

Indirectly it is Israel and the Palestinian Authority who pays for Gaza Electricity.  The same method is used to supply about 70% of the water for Gaza usage and for the medical treatment of about 14,000 Palestinians from Gaza Strip in Israel, each year.

The Palestinian Authority treasury, funned by Europe and USA, pays monthly wages to about 60,000 former employees of the Fatah administration in Gaza although most of them were dismissed by the Hamas. Another 60,000 receive wages from the Hamas administration funded by Iran, Saudi Arabia and the Gulf Emirates.

Another source of income for Gaza is the buildup of the Hamas military force funded solely by Iran.

Gaza Strip is indeed a very poor place but is far from starving. Unlike in Darfur, Somalia, Zimbabwe or Myanmar there is streaming water, basic food supply, electricity and functioning education system.

There is no humanitarian crisis in Gaza despite an effort to blame Israel for “starving Gaza population to death” as the former president of USA Jimmy Carter put it.  The struggle of Gaza is about the legitimization and international recognition of the Hamas regime versus the Fatah regime in the Palestinian West Bank, about the minds and hearts of the Palestinian people that will eventually lead to full control of the Hamas on the Palestinian society or to the division of the tinny Palestine to two states Fatahland in the West Bank and Hamastan in Gaza.
* Related topics –